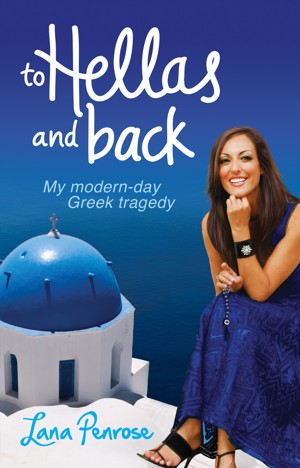 To Hellas and Back

By Lana Penrose
My Modern-Day Greek Tragedy: A funny, moving true story of a woman following the love of her life to the ends of the earth, only to lose her mind! More
When Lana and Dion head to Athens, they have no idea what lies in wait. Dion has been offered the job of the century, while Lana chases a sabbatical involving sun, sea and sand. But while the gods couldn't have been kinder, this is one travel adventure that does not go according to plan.

Lana finds it difficult to articulate beyond pointing and snorting. She acquires towering hairstyles and discovers solace only through tweezering her leg hair. Meanwhile, Dion is having the time of his life, embracing his Greek ancestry, and slipping further from Lana's grasp just when she needs him the most.

Welcome to a cross-cultural love story with all the trimmings: a big, fat Greek wedding, a son-worshipping mother-in-law, a fast-crumbling psyche and an unexpected ending.

Bestselling author Lana Penrose was born in Sydney, Australia. Her various incarnations have included record company promotions gal, music journalist, MTV producer and personal assistant to an iconic pop sensation known the world over. She also did a brief stint with Simon Cowell.

Along the way she moved to Greece and penned the acclaimed bestseller 'To Hellas & Back' as her mind melted. Her second release 'Kickstart My Heart' followed. Both madcap memoirs were originally released through Penguin/Viking. Both were extremely well received.

Lana has appeared on national breakfast television and she and her books have featured in Vogue, Cleo, Madison, Famous, Woman's Day, That's Life and numerous newspapers and radio shows. She appeared on stage as part of the Darren Hayes Big Night In tour throughout the UK, Ireland, Sydney and Thailand. She was also a guest speaker on four panels at the prestigious Byron Bay Writers' Festival.

With her stories being rife with musical references, a 'Kickstart My Heart' companion CD was released through Universal Music.

Today Lana can be found gazing through her window in between writing thought-provoking sentences and wishing that she had a cat. New releases are in the works.

You have subscribed to alerts for Lana Penrose.

You have been added to Lana Penrose's favorite list.

You can also sign-up to receive email notifications whenever Lana Penrose releases a new book.