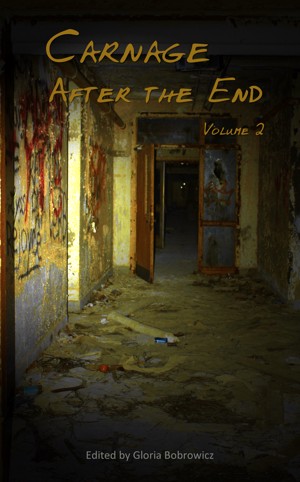 Carnage: After the End - Volume 2

By Gloria Bobrowicz
Rated 4.00/5 based on 2 reviews
Hell has invaded Earth and happy endings are a thing long since forgotten...

The ten stories in Carnage: After the End - Volume 2 tell of the frighteningly horrific and cruel lives the survivors must face. Each one takes us to a place where humanity’s stragglers are forced to battle for their very existence against their own grim reality; creatures from different worlds or times, individuals or groups of miscreants who feed on the fear of the weak, and even the terrifying threat of unknown bacterial organisms. Their will to go on diminishing among the tatters of the civilization they once knew.

In a world where society has collapsed and terror lurks around every corner, no one can be trusted and nothing can be taken for granted.

The Apocalypse has come, leaving in its wake small pockets of survivors battling to stay alive; each carving out a new beginning for mankind…

Also in Series: Carnage: After the End

In reading this second volume of Earth ending short stories you will realize just how many ways life as we know it could end. It could make you feel very small and totally useless or, depending on your point of view of society, it could fill you with hope knowing that the end is always near and that maybe if the ever impending apocalypse does happen we can rise from the ruin and try not to make such a mess of the World the second time around. Either way read and enjoy yet another fine collection of 'what-if' tales.

Included:
'Jaundice' by Zachary O'Shea: In a world overrun with mold and mildew Cara's detestable job is to clear out the yellowed infected that used to be people. On a routine run she is suddenly isolated from her crew, as danger draws near a man with an axe provides rescue but is he a hero or is there something else running through the ruins that could pose the greatest threat yet.
'Hoolies' by Harper Hull: After the end, the remaining survivors fly colours, flags that set them apart from other gangs and provide a sense of pride. To lose your flag is to incur shame and death. Are these flags really reminders of old society's divisions or merely incomplete remnants of kinship and shared interests?
'Juliana' by Angel D.Callido: Kenshiro wanders across America's ruined wasteland in search of his sister. A terrible disease has turned many people into 'Spitter's'. Will a chance meeting with a few soldiers aid him in his quest to find his remaining family or provide him with more misery?
'The Mouse Ran Down' by Adrian Tchaikovsky: A small group of survivors jump from era to era, trying to outrun their enemy. From Prehistoric to Elizabethan to Roman, can time begin again as normal or are they doomed to run forever.
'Rock Garden' by L.E. White: A meteorite that falls to ground in Hawaii has the effect of turning people to stone. As a man tries to keep his family safe, reports start surfacing that some survivors have taken to eating the rock remains of the dead with terrifying consequences.
'The Silence of the Dead' by Wednesday Silverwood: A complete silence fills the world. Neither voices or footsteps are heard. Even the rolling sea is silent. As the world erupts into chaos and savagery some people hide, wary of the strange creatures that circle in the air.
'A Birthday to Remember' by Harry Manners: Alex wakes to a world empty of people. A great blaze takes the street as he watches. Alone, he runs trying to ignore the tidy piles of clothes that litter the pavement as the people inside them simply vanished.
'An End for Some' by Jason Lairamore: When bombs fall a boy moves along with his extended family into the countryside. He is forced to grow up fast as his skills are tested when his parents disappear and he is left to rescue his sister from a gang of violent marauders.
'Knock Knock, Who's There?' by Magda Knight: A surrealist tale of a science experiment gone awry, massive unnatural beasts, knights in shining armour and survival by beach ball.
'Clean World' by Charlie Fish: A world 'cleansed' of people allows a man the freedom to do as he wishes. To destroy or admire, without rule or law he enjoys his people free domain and is willing to do anything to protect the lifestyle he so enjoys.

A good collection of stories that both expand the field of apocalypse by taking it in new and fresh directions while also dealing with the subject in varied and deep detail.

NOTE: I was gifted this book for the purpose of review.

Carnage: After the End – Volume 2 picks up with ten new stories that deserved their own anthology separate from Volume 1. This anthology, like the original, is published by Siren’s call Publications and will make you think about the end of your world. The stories you will find inside, come from the mind of ten writers who use their imaginations to bring the reader a unique story.

The stories will teach you the importance of keeping your principals as those around you lose them. It could be a simple case of those who have lived on the land versus those who have fed off their work.

Those of you with a sport allegiance, like a favorite soccer, football, baseball or other sport team will see the extreme end of that allegiance. A story within these pages takes you to a world where people live under banners. The banners holding an emblem for their clan, their people, but at one time could have met much more. You will get to read about this world and how things turn out for these bands of people as they try to survive.

Those who are star gazers enjoy staring into the night sky watching for movement within the sky. The thrill of a falling star can make you smile from ear to ear. In some cases these stars find themselves falling through the Earth’s Atmosphere and slamming into the Earth at tremendous speed. They can raise dust into the air that can pollute the Earth. These hard stone elements slamming into the ground are often harmless, but one writer imagines how “hard” things can get after such a collision.

The stories continue to take you in directions you do not expect. I mean Happy Birthday being shouted out by friends and family is something every young child wants to hear. It’s not often that special day comes and you cannot feel that excitement. As many of us as we get older we’d rather not count the day for what it is, but inside we hope for a party. So imagine yourself waking up on that special day and no one is around, what would you do, well the story “A Birthday to Remember” gives you that idea.

The last of the ten stories I will share some insight on is one that many have wished for after a hard day. We wish for piece, and not to be bothered. We want all around us to just leave us alone so we can clear the mind and relax. What if you could make that happen, and not just your house but the world? Well to find out you must read this anthology.

Below check out the tile of the story and the Author who is featured in Carnage: After the End – Volume 2.

The Mouse Ran Down by Adrian Tchaikovsky

The Silence of the Dead by Wednesday Silverwood (on Twitter @WednesdaySilver)

A Birthday to Remember by Harry Manners

An End for Some by Jason Lairamore