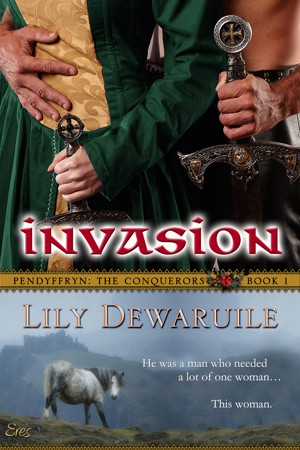 By Lily Dewaruile
“You will know the man…”

Gwennan will only inherit her family’s ancestral land if she has a child of her own. Her father has rejected all the men who have asked for her. When he tells her that her most recent suitor has one redeeming quality, she decides to act on her own behalf. She chooses her own husband with unexpected results. Her childhood friend and first love proves to be no better choice. When her home is invaded by the hired killers of an ancient enemy, she meets a man even her father could approve, though he is also a man determined to destroy everything in his path to get what he wants – whether it is Gwennan or her rich estate – nothing has the power to stop him.

Lily is a best-selling author and American writer of medieval Welsh fiction, and lived in Cymru(Wales) for 30 years. She is a member of Romance Writers of America, Hearts Through History Romance Writers and Celtic Hearts Romance Writers. She has written six novels set in 9th-10th Century Cymru(Wales): Traitor's Daughter, and the five novels in the Pendyffryn: The Conquerors series: Invasion, Salvation, Betrayal, Revival and Reconciliation.

Lily's Pendyffryn: The Inheritors continues with stories of Ieuan Emyr's and Christophe Maides's sons and daughters to be released, beginning in 2014.

The sequel to Traitor's Daughter, Vengeance's Son, is planned for the Fall of 2014.

Also in Series: Pendyffryn: The Conquerors