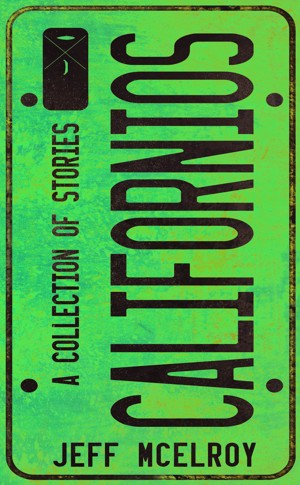 By Jeff McElroy
With surfing at its core, the stories collected in Californios reach beyond the ragged sun-bleached periphery of surf-culture, into the lives of shiftless coastal dwellers and migrant field workers. Jeff McElroy channels the Bob Dylan-esque drawl of the West Coast vernacular, creating a world far removed from beach blanket bingo. More
“Jeff McElroy’s perfectly pitched prose sings like the surf that rolls and breaks over the beaches in most of these stories. The surfers, beach bums, migrant farm workers, and burned-out corporate drones that populate Californios are descendants of Kerouac and pilgrims in search of the perfect wave. We follow them along the ragged edge of the continent to places far from the glitter of Hollywood and deep inside the frailties of the human soul. In this impressive debut, McElroy takes us on a ride as sweet and smooth as words can carry us.”
Steve Heller - Author of The Automotive History of Lucky Kellerman, (Chelsea Green/Doubleday) and Chair, MFA in Creative Writing, Antioch University

"Jeff McElroy mines a rich, untapped vein of Californiana in this unique collection--sounds, smells, and textures of a California intimately, intensely known by all of its surfers and farmers, truck-drivers and migrant workers. This is a genuine, significant contribution to the literature of our coast and our culture."
Daniel Duane – Author of Caught Inside: A Surfer's Year on the California Coast (North Point Press)

“Every once in awhile someone comes along who recognizes that the tableau into which they have been dropped is unique. What Jeff has done, is to weave a creative tapestry that communicates his world with an honesty and innocence which informs and inspires the reader to take a sip of Californian culture. What is remarkable about that experience, is that in so doing, each reader will take away a view which will broaden their own explorations.”
David Pu'u – Internationally renown surf photographer, and contributor to Surfer Magazine, Surfing Magazine, The Surfer's Journal
Available ebook formats: epub mobi pdf rtf lrf pdb txt html
First 20% Sample: epub mobi (Kindle) lrf more Online Reader
pdb
Price: $4.99 USD
Buy Add to Library Give as a Gift
How gifting works
Create Widget
Tags: short stories california noir ocean surfing ventura beach lifestyle native american folklore central coast oxnard jalama beach
About Jeff McElroy

Author Jeff McElroy received his MFA in Creative Writing from Antioch University. He won First Place in the Writer's Digest Short Story Contest for "Brown Pride." His stories "The Tipsy Fox" and "Song of the Earth" were selected to represent the Antioch MFA Program at the 2008 and 2009 AWP Awards. "Goofyfoot" was adapted to film, screening at the Ventura, Santa Cruz, Santa Barbara, San Diego and Newport Beach Film Festivals, and winning the Audience Award for Best Dramatic Short at the Valley Film Festival in Hollywood. Jeff is a regular contributor to Wetsand.com, one of the largest surfing websites in the world. "Californios" is the first published collection of his short stories.

Reviews of Californios: a surf noir collection by Jeff McElroy

You have subscribed to Smashwords Alerts new release notifications for Jeff McElroy.

You have been added to Jeff McElroy's favorite list.

You can also sign-up to receive email notifications whenever Jeff McElroy releases a new book.