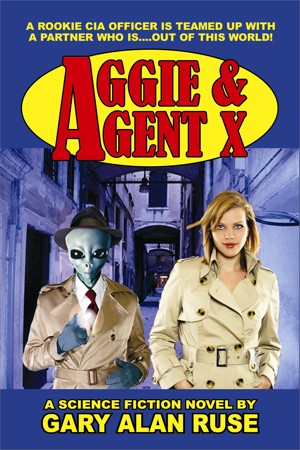 By Gary Alan Ruse
Rated 5.00/5 based on 1 reviews
A rookie CIA officer is teamed up with a partner who is...out of this world! This quirky and often funny blend of sci-fi, espionage, mystery and old movie atmosphere should appeal to fans of all of those genres and more. More
Rookie CIA officer Agnes Westfeld is excited when she gets her first real assignment after only three months at the agency, even though she’s told it will be basically just a “baby-sitting” job. But when her new HQ turns out to be a legendary top secret base in the Nevada desert and her new partner is “out of this world,” pitted against an evil mastermind who will stop at nothing, Aggie goes on a wild and wacky spy mission that is the adventure of a lifetime!

This quirky and often funny blend of sci-fi, espionage, mystery and old movie atmosphere should appeal to fans of all of those genres and more.

From the author of Houndtooth, A Game of Titans, The Gods of Cerus Major, Morlac: The Quest of the Green Magician, Death Hunt on a Dying planet, The Cross of St. Anne, Murder in Deer Park and numerous stories in magazines and anthologies.

I loved this book by Gary Ruse. I couldn't put it down. He is a gifted writer. This book you feel like your in it not just reading it. Very good Job Gary