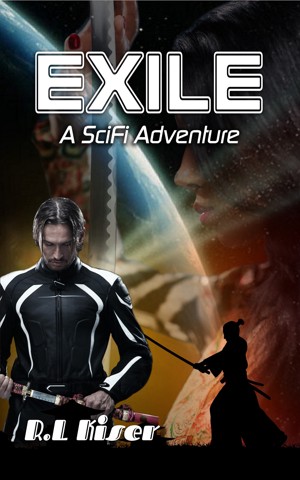 By R.L. Kiser
Rated 3.50/5 based on 2 reviews
A 6'5" starship captain flees a lost war and lands on Earth in 1600s feudal Japan. Imagine the possibilities! More
· In Earth's far distant past an epic battle took place in space thousands of light years away. Facing only annihilation Captain Kendrick turned his interstellar fighter craft to the farthest reaches of the galaxy until he reached a blue marble of a planet and landed on a large island in its northern hemisphere. Earth. 1600s feudal Japan. A 6'5" warrior from an advanced culture in a land populated by 5'8" war-like people.
· Imagine the possibilities!
· He befriends the local Shukido, a Bushido Warrior-Protector, brings innovation to the local ship builder Honashi, master of the village, falls for his beautiful independent daughter Doiyoko, saves and is adopted by a tiger. He helps them to thwart an attack by a neighboring warlord. They in turn help him to defend against his enemies when a patrolling spacecraft discovers his presence, sometimes by using kinetic energy weapons (rocks).
· When challenged by Honashi to a race using his sleek new sailing sloop vs Honashi's own through the dangerous Doro-bai, the treacherous shoreline passage wrecks the ship. He and Doiyoko are forced to overcome their injuries, climb a steep cliff, and strike out overland where they encounter and battle bandits. In the process they save an endearing young woman who charms the elder Honashi when he finally finds and rescues them. But she's not what she seems.

Exile-A SciFi Adventure
A 6'5" starship captain flees a lost war and lands on Earth in 1600s feudal Japan. Imagine being light years from home and landing on a large island populated by war-like people only two thirds your size. Will they look upon him as a god from the heavens or a demon from the skies? His survival skills will be put to the test.

Exile is really two complete stories in one, although it isn't broken down that way in the table of contents.

Part I:
Exile begins as Kendrick surveys his new home. Having narrowly escaped the empire who destroyed his own civilization, he's picked an out of the way, undeveloped world where he hopes they won't follow. But his arrival does not go unnoticed. A local lawman, or Shukido, investigates the "meteor" landing site and discovers him. Kendrick becomes friends with these surprisingly civilized natives and proves himself to them early on by helping them deter an invasion force from a local warlord. A rebellious daughter of the local shipbuilder catches his eye and the two hit it off.

But Kendrick worries that those he has come to love will suffer for it when his ship's sensors detect a drone entering Earth's atmosphere. Will it find him? If it does, will he be able to protect his new friends and their way of life from the soulless soldiers of the empire?

Part II:
The second story in the book begins several years later after Kendrick is well settled into his new life. An idle conversation turns into a bet when Kendrick's father-in-law, remembering his youth, bets that his smaller racing boat can beat Kendrick's larger one in a race down the coast and through a particularly nasty stretch of water. Despite reservations, Kendrick agrees.

When the race turns sour, Kendrick and Doiyoko find themselves shipwrecked and have to find their way back to Honashi village by foot. When they run into bandits and a mysterious young woman, things get interesting.


I liked this book, but was surprised when the first part completely wrapped up midway through the book, and the second part picked up years later.

Each part is well-developed and researched. Being from an advanced race (and likely a genius), Kendrick is able to recreate many of the technological advancements his hosts have yet to develop, much to their amazement. In addition to the detailed descriptions of how these things are done, the author effectively and humorously shows how communication between Kendrick and his friends progresses from hand signals and facial expressions all the way to speaking their language.

I found the characters to be interesting and well-developed and the world to be vividly described and believable. And, of course, the battle scenes are fast-paced and bloody, using both weapons of the time and the futuristic weapons brought by Kendrick and his enemies to good effect. The author has a knack for bringing you into the battle.

In an almost mystical way, Kendrick also befriends a tiger. I enjoyed the comical interactions between the two and how the tiger intimidates enemies, but I had to force myself to disregard that real tigers are not likely to act like house cats or befriend humans so readily. Maybe it's something about Kendrick's alien DNA that allows the connection.

On another note, I feel the overwhelming awesomeness of the main character, the unlikely friendship with the tiger, and a few parts that were hard to follow (especially those that cataloged technological builds in detail) kept me from fully enjoying the story and rating it higher, but for the most part I liked it.

Overall, this is a entertaining book on many levels. Those who enjoy reading about real-life and and science fiction technology will enjoy the technical parts. Those who like laser fights and battles between uneven forces where the underdog must overcome long odds will enjoy the battles. Those who like strong women who overcome social barriers and can hold their own will enjoy Doiyoko, Kendrick's love interest. Those who enjoy a little mystical and technological awesomeness in their main character will love Kendrick. And, finally, those who enjoy humorous situations and camaraderie will find more than a sufficient dose in this book to satisfy their funny bones.

Note: I received a free copy of this book for an honest, non-reciprocal review.

good story; seemed a bit too easy for hero and his new friend to overcome the imperial bad guys when they showed up.