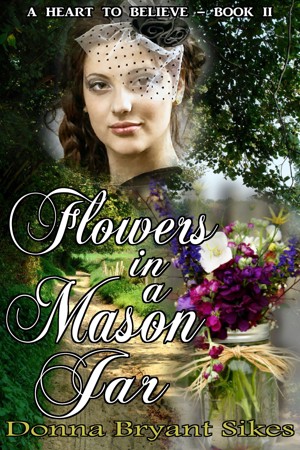 Flowers In A Mason Jar

Donna has been writing poems and short stories most of her life. In 2012 she began writing books. A Heart To Believe is her first published work via AuthorHouse. Charli's Angel is her second, via Smashwords. Book II of A Heart To Believe, Flowers In A Mason Jar, will be published, via Smashwords, in December of 2012. A Children's Christmas story is being published via Smashwords in November of 2012. Donna lives with her husband, Allen, in Georgia. They have three children and six grandchildren. They are raising two grandchildren, since their daughter passed away in 2010. Besides writing and raising grandbabies, Donna works part-time. Her memories of her hometown of Thomaston, GA, and visits to family farms in Bleckley County, GA, are inspirations for her books. Donna loves getting emails at donnabryantsikes@hotmail.com. She considers all her readers, her friends.

At one point in this book made me laugh, another part it made me tear up....Oh well that's what happens when you write a good book.....I will always love this book, it reminds me of my grandma, she was from missouri, grew up on a farm and did a lot of chores.....I think,she would have loved this story..... She later moved to iowa in 1960....Thank you so much for writing it.......

You have subscribed to alerts for Donna Bryant Sikes.

You have been added to Donna Bryant Sikes's favorite list.

You can also sign-up to receive email notifications whenever Donna Bryant Sikes releases a new book.