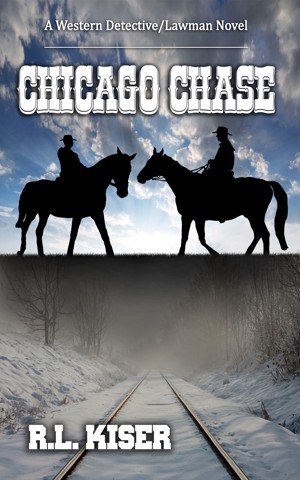 By R.L. Kiser
Rated 4.00/5 based on 1 reviews
A killer leads three lawmen a merry chase into dangerous renegade Kiowa territory and buries them in a snow avalance. How will they get out of this one? More
· In the late 1800s American west U.S Marshal Tyrone Narrowhawk and his big partner Merle Johnson bust a cattle rustling ring in pursuit of a killer named Pearson. But capturing this slippery devil turns out to be no easy task.
· They are joined by Hawk’s old mentor, a way-past-retirement crusty old ( but very capable) lawman named Pike, who still has a trick or two up his sleeve.
· In their pursuit they encounter renegade Kiowa on the warpath and must extricate themselves from some tricky situations. Several years before there was a joint Kiowa-Comanche Indian raid and massacre of soldiers and civilians where a shipment of government gold bullion was stolen. Pearson has a plan to use money from stolen cattle to buy black market army Winchester rifles and ammunition to trade with the Kiowa chief who engineered the original raid. He wants that gold. Hawk, Merle, and Pike throw a monkey wrench into his plans. But he’s clever. Once arrested it’s not over. He tries to bury them in an avalanche of snow, but they are clever too. They don't give up so easily.

Chicaco Chase, sequel to Educated Injun, is a wild west adventure that moves along at a good pace. I enjoyed the banter between Hawk and Merle, as I did in the first book, and the new character, Pike, kept me laughing the whole time.

In this installment, the Judge sends Hawk and Merle after Pearson who is wanted for killing two men. As they come close to catching him, they find that he also has a hand in cattle rustling. Seems like a typical old west tale at first, but then things get interesting when hints of stolen gold, savage Kiowa indians and smarmy army men with their own secrets come into the picture. Add to that the cat and mouse chases, battle royales in moving trains and shoot outs with outlaws and indians and it's quite a wild ride.

On the downside, I got lost a few times here and there where something happens and then something that happened before that is added afterwards. Also, some of the earlier chapters seem a bit rushed, especially with descriptions of dialog in place of actual dialog. A bummer because R.L.'s dialog and comical character interactions are the highlight of his stories. Luckily, everything picks right up when the team reaches Chicago and everything I love about his writing begins to shine through.

Overall, I enjoyed this story and would recommend it to folks who love a good western, a good chase or mischeivous characters with a lot of personality (gotta love how Hawk always manages to snag one or more of the Judge's cigars).

Note: I received a free copy of this book in return for an honest review.