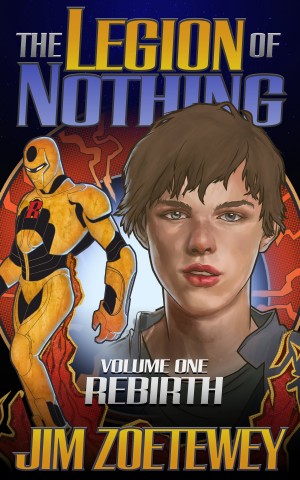 The Legion of Nothing: Rebirth

By Jim Zoetewey
With his friends, Nick has inherited more than his grandfather's superhero armor and the League's underground headquarters. He's inherited the League's enemies, and unfinished business. More
"You may kill somebody today. We won't think anything less of you for it."

Nick Klein's grandfather was the Rocket.

For three decades, the Rocket and his team were the Heroes League - a team of superheroes who fought criminals in the years after World War II.

But Nick and his friends have inherited more than their grandparents' costumes and underground headquarters... they've inherited the League's enemies and unfinished business.

In the 1960's, Red Lightning betrayed everyone, creating an army of supervillains and years of chaos. The League never found out why.

Now, Nick and the New Heroes League will have no choice but to confront their past.

Jim Zoetewey grew up in Holland, Michigan, near where L Frank Baum wrote The Wizard of Oz and other books in that series. Admittedly, Baum moved away more than sixty years before Jim was even born, but it's still kind of cool.

Jim didn't attain his goal to never leave school, but did prolong his stay as long as possible. He majored in religion and sociology at Hope College, gaining enough credits to obtain minors in ancient civilizations and creative writing—had he thought to submit applications to the relevant departments. He attended Western Theological Seminary for two years. He followed that up by getting a masters degree in sociology at Western Michigan University.

Once out of school, he took up the most logical occupation for someone with his educational background: web developer and technical support. Simultaneously, he finished all but three credits of a masters in Information Systems, a degree that's actually relevant to his field.

In the meantime, he's been writing stories about superheroes and posting them online at http://inmydaydreams.com. He's still not sure whether it's a good idea, but continues to do it anyway.

He's also not sure why he's writing this in the third person, but he's never seen an author bio written in first person and doesn't want to rock the boat.

About the Series: The Legion of Nothing

During World War 2, the United States created a team of super soldiers. In the 1950's, the survivors became the best-known heroes of their time. This series follows their grandchildren as they bring back the Heroes' League.

Also in Series: The Legion of Nothing

You have subscribed to alerts for Jim Zoetewey.

You have been added to Jim Zoetewey's favorite list.

You can also sign-up to receive email notifications whenever Jim Zoetewey releases a new book.