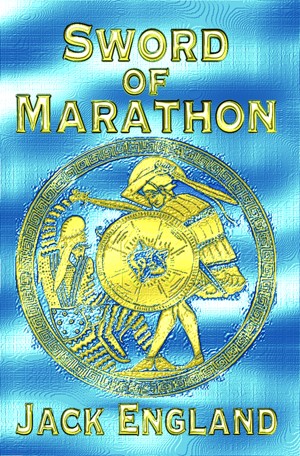 By Jack England
Luke, a Gothic prince, journeys south to prove himself worthy of kingship. But in Athens, Luke finds manhood and an unexpected destiny. Drawn into a vicious war against the Persian Empire, and confronted with superior military force on the plain of Marathon, Luke fights in bloody battle alongside the Greeks. The outcome impacts his life, his lovers, and the world’s future for millennia to come. More
Luke, a Gothic prince of Angland and a shaman's pupil, sets out to prove himself worthy of kingship by finding traders for his people's amber jewels. His journey leads him south through treacherous waters and murderous barbarians. With younger brother Hal at his side, and trust in his sword, Luke finds a new and unexpected destiny.

In Greece, Luke finds manhood too, with the voluptuous and beautiful Agariste. She reveals a rotten secret at the heart of Athens, which draws the brothers into a vicious war against the Persian Empire. King Darius the Great, with his vast navy fleets and army legions, is bent on destroying the Ionian city of Eretria, and then Athens, with its fledgling democracy and its persistent refusal to bow to tyranny.

As leader of the toughest seafaring mercenaries in Greece, Luke gathers vital intelligence for the General of Athens and rescues the future mother of Herodotus, the world's first historian. Luke's quest also reveals Misia, an alluring young Carian princess, who betrays him, yet captures his heart.

Confronted with superior military force on the plain of Marathon, Luke, Hal, and the Greeks engage the Persian army in bloody combat, in one of the most important and epic battles of all time. Its outcome will decide the future of the entire world for decades and millennia to come.

Jack England lives in Henley-on-Thames, in England, and has a keen interest in classical history; mythology and its relationship to language; and the world of Aristotelian economics and its later logical descendants. This book is the first in a series of novels exploring the complex relationship between ancient Greece and Persia, as told through the adventurous lives of Luke and Hal, the Gothic princes of Angland. You can follow his activities at: http://JackEngland.WordPress.com

You have subscribed to alerts for Jack England.

You have been added to Jack England's favorite list.

You can also sign-up to receive email notifications whenever Jack England releases a new book.