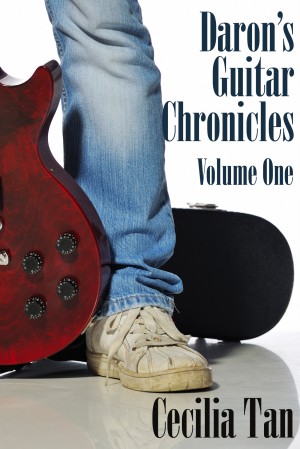 Rated 4.33/5 based on 3 reviews
Sex, drugs, and rock and roll. Coming out and coming of age in the days of AIDS, MTV, Reaganomics, and Just Say No. Daron Marks is a young guitar player with a dream: make it big like the guys he grew up idolizing in New Jersey--or at least escape his dysfunctional family. He makes it as far as music school in Rhode Island, and the stages of Boston beckon. But it's hard to succeed from the closet. More
Volume One of Daron's Guitar Chronicles begins when Daron finds himself at a bar in Providence, filling in for the regular guitarist in a hair metal cover band. He's not thrilled about it, but a gig's a gig. He's too young to drink and trying not to think about how his scholarship money has run out. He'll need to figure out a way to make a living, much less stay in music school. Everything changes, though, when his former mentor walks into the bar.

Winner of the Rose and Bay Award for Crowdfunded Fiction!

"For me, Daron is one of those rare fictional characters that I have a hard time believing does not actually exist on the physical plane. He is just too real. Part of it is that Daron is only a couple of years older than me and the way the 80s are brought to life here reminds me very much of my own coming of age: the musical references, the language, the AIDS scare, the technology, the hair...Most of all, though, it is the fact that Daron is an extremely well written character. He grows and changes and engages."
—Reviews by Jessewave
Download: epub mobi (Kindle) pdf more Online Reader
rtf lrf pdb txt
Price: Free! USD
Add to Library
Create Widget
Tags: coming of age gay serial fiction glbt 1980s guitar coming out rock and roll web fiction gay themes weblit
About Cecilia Tan

Reviews of Daron's Guitar Chronicles: Volume One by Cecilia Tan

I received an ARC of this from NetGalley for a fair and unbiased review.

This was definitely an interesting book. It mostly takes place on the East Coast of the US particularly in the New England area (Northern East Coast for those who don't know).

I also enjoyed the excerpt from volume two at the end of this book.

The way that one of the songs was described I felt like I could practically hear it which is a new thing for me when it comes to books. And was definitely a good thing. I like being able to envision things while I read. And the author definitely does a good job with descriptions.

Read the rest of the review here: https://blowpopsbooks.wordpress.com/2015/09/23/review-darons-guitar-chronicles-volume-one/

When I ran into this story on its website, I started reading... and didn't stop until I faceplanted two hours past my bedtime. And then I woke up the next day and did it again until I got to the end. That probably tells you everything you need to know right there. -_-

But more extensively: this is a first-person narrative set in the 80s, told by a 19-year-old musician trying to make it in the rock scene. He's got a problem family, no money, and if that wasn't enough of a challenge, he's also gay. In the 80s.

I have to be honest... I'm kind of over coming-of-age stories. I may at one point be excited about them again, but for now I'm really tired of the pinhole perspective of self-involved teens. But Daron's Guitar is missing that "this universe is populated solely by teens" feeling. Tan fills Daron's world with adults at every stage in their life, from the grizzled music veterans, the failures and the tired agents to their daughters, Daron's schoolmates and the hopefuls in the music industry. Daron observes them all; sometimes he lacks the life experience to understand them, but we know that they have a life outside Daron's limited perspective and Tan paints that very well. This world feels real: like our world, like we could run into Daron today and this will all have had happened.

Not only that, but the music details are just fabulous. This is someone who really knows her stuff. I actually laughed out loud when Daron made a reference to Jon Anderson when snarking about a former roommate who was trying to get weird/experimental. If that wasn't enough, every chapter title... is an 80s song. Not just a trip down nostalgia lane for those of us who lived through them, but an impromptu soundtrack and pretty darned clever.

Finally, I'm really impressed by the portrayal of Daron's relationship difficulties (such as he can be said to have them, given the circumstances). His struggle between the typical teen hormonal highs and lows and his need to have a meaningful tie with someone... it's poignant and deftly evoked. Such a great loneliness, conveyed so powerfully and yet without preaching.

This is incredibly skillful writing and a compelling story. Pick it up in this format, or get it off the website... you won't be disappointed either way.

The strength of Cecilia Tan's fiction has always been her characters. She can write delightfully wicked villains that you can't help but love to hate. She can pen a cad with the best of them. But in my opinion, she shines the brightest when her she writes a character who is simply heartwrenchingly sweet, especially when that character seems to hope beyond hope that this wasn't true of them.

The protagonist of this story is one of those characters. Rock guitarists are supposed to be thick-skinned and effortlessly charming cads. Daron isn't this at all: Daron is...well, he's real. It's 1986 and Daron isn't even 20 yet and he's already well on his way to being a future rock god. Unfortunately instead of being a womanizing sweet-talker he's an averagely awkward 19-year old who just happens to be gay (even though he can't even bring himself to say the word.) He doesn't know anything yet about who he really is, or what he needs in a partner, or even if he wants a partner at all. All he knows is that in his business “faggy,” “queer,” and “gay” are the most viciously insulting words there are.

***I kept my own eyes ahead, trying not to stare at the graffiti splashed across the steps ("Queer By Choice") trying not to hear the conversation of the two men coming the other way, trying to shut it all out. My hands felt damp as they brushed against my jeans. Everything here was a signal, a secret handshake, a subliminal image, and I wondered how long it would take Carynne to see right through me. What would I do that would give myself away? Even I had no way of knowing.***

The author does a fantastic job throughout the book of generating empathy for her lead character without provoking pity. We as readers can feel his hurt and his confusion, and share his victories and regrets. Being gay is an integral part of who Daron is, but Ms Tan doesn't fall into the trap of allowing his sexuality to become his identity entire. He is a well-rounded sympathetic and delightful character in a charming, at times poignantly sad but always engaging book. Rock on, Daron, rock on!