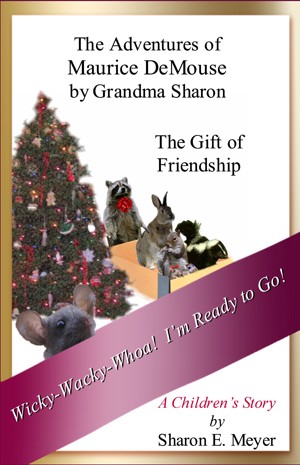 The Adventures of Maurice DeMouse by Grandma Sharon, The Gift of Friendship

By Sharon E. Meyer
Discover the real meaning of Christmas as Santa pays Maurice and his furry friends a visit and leaves them each a Christmas gift. But the gift without a name tag was the best gift of all. This is not just a Christmas tale, but a story of cooperation and friendship. Twenty-one photos and a poem about Santa will not only delight children, but adults as well. More
"As morning approached, Maurice saw someting beautiful in the nearby forest. The evergreen trees where the little mouse and his friends liked to play were glowing with tiny little lights. And standing nearby was a man wearing a red suit with nine reindeer pulling a large sleigh. One reindeer had a bright red nose! It was magical."

"T'was the night before Christmas, the world was at peace, and one creature was stirring: a mouse named Maurice. While the little guy was snooping beneath the Christmas tree, Santa appeared and said, 'Are you looking for me?'"

Twenty-eight rhyming lines describe Maurice's adventure with Santa Claus as he leaves presents under one special tree in the forest for Maurice DeMouse, mouse friend Maureen, Bobby the Bunny, Squeaky the Squirrel, Stinky the Skunk, and Rosie Racoon. But there's one present without a name on it.

This is not just a Christmas tale, but a story of cooperation and beautiful - and funny - friendship between the furry friends.

Twenty-one photos and a poem about Santa will not only delight children, but adults as well.

Sharon (Daniell) Meyer was born and raised on Long Island, NY where she competed in State, Northeast Regional and National roller skate dance, and won 138 trophies, medals. In her early teen years, Sharon became the youngest dance skater to receive the prestigeous Gold Medal for proficiency in roller skate dancing.

After graduation from Sewanhaka High School, Sharon attended Brownes Business School, and pursued a career as a legal secretary.

In 1994 Sharon relocated to New York City and married Edward Meyer. Upon his retirement in 1998, Edward and Sharon moved to Texas where they now reside in San Antonio.

Sharon and her husband each have two children and together share nine grandchildren and several grand-dogs.

When a little mouse ran from a fireplace on a cold winter night, startling two of the author's young grandchildren, they asked her to tell them a bedtime story about the mouse that invaded their home. They were fascinated and wanted another story about the mouse... and another... and another. Thus came the creation of more than twenty-five stories entitled “The Adventures of Maurice DeMouse.”

When not writing stories for her grandchildren, Sharon enjoys spending time with her nine grandchildren that span from Texas to Pennsylvania, traveling with her husband, writing her memoirs, researching her family’s history, and gardening - when Texas weather permits.

You have subscribed to alerts for Sharon E. Meyer.

You have been added to Sharon E. Meyer's favorite list.

You can also sign-up to receive email notifications whenever Sharon E. Meyer releases a new book.