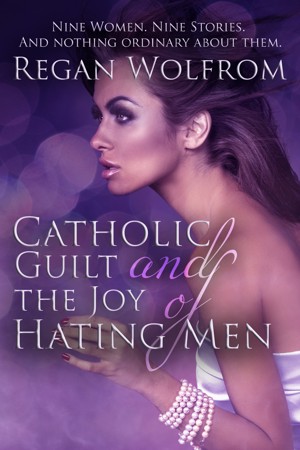 Catholic Guilt and the Joy of Hating Men

Heather Smythe
Pretty. Shy. About as lapsed as a Catholic can get.
Heather's trapped in the a cult of killer succubi with a taste for East Hollywood douches.
("High Times at the Sixth Annual Succubus Sisters Garage and Bake Sale")

Amanda Hackensack
Somewhat tall. Can't dunk. Never knew her father.
Amanda wakes up in a world of voodoo and zombies that she knows shouldn't exist.
("The Zombification of Amanda Hackensack")

Stephanie Munro
Hard working. Hard drinking. Hard to please.
Stephanie comes to regret taking a trip on the edge of the world with people she knows she shouldn't trust.
("The Raven's Head Dagger and the Custom of the Seas")

Marie-Claire Grimson
Pink hair. Pretty smile. Like to eat people.
Marie-Claire may soon discover that meat is murder no matter how you slice it.
("Vegans Are F**king Delicious")

Maddy McKay
A little lonely. A little self-conscious. Starving to death.
Maddy's trying to slim down to starving model size, but her little housemates don't seem all that supportive.
("Maddy McKay and the Elves in Her House")

Regan Wolfrom (born at the tail end of the disco era) has come a long way from his 1986 debut novel Harry the Adventurous Hamster (currently out of print due to having never been published or completed). After a break from writing to attend puberty, and to eventually sell six packs of Molson Canadian to his misnamed crush, Moosehead Girl, Regan returned to the craft with reckless abandon and a gallon jug of iced tea with just a smattering of extremely cheap rum.

Regan is now the author of numerous short stories and an upcoming post-apocalyptic novel series with only one mention (so far) of zombie erections. Regan hopes to one day write a novel set on Mars while sitting in his boxer shorts on the actual Red Planet, and everything that comes before that is really just his way of saving up for the one-way trip.

Though Regan has been shafted by residency requirements in his pursuit of the MacArthur genius grant, his current fiction is considered to be of high caliber, reflecting a marked improvement in style and grammar from the aforementioned thing with the hamster. It also has far fewer graphic scenes of pound puppy plushes having sex in the back of a shoebox with paper wheels.

What does Regan have to say about Regan?

"I recently passed up the chance to hassle Samuel L. Jackson."

"I've always wanted to change my name to something boring, like Hugh Howey."

"I know how to cook six things. None of them are oatmeal."

"I write stories that are weird, a little dark, and definitely inappropriate for my children. It could be tough to keep that going when they get to be as old and weird as I am today."

Please read one of Regan's stories for a more in-depth tour of Regan's unresolved childhood issues.

You have subscribed to alerts for Regan Wolfrom.

You have been added to Regan Wolfrom's favorite list.

You can also sign-up to receive email notifications whenever Regan Wolfrom releases a new book.