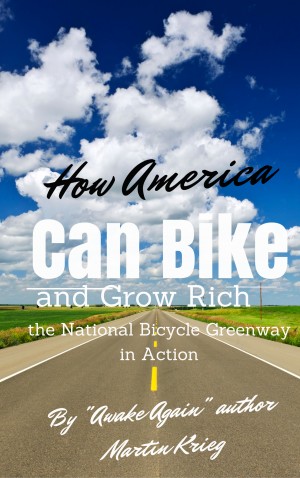 "How America Can Bike and Grow Rich, the National Bicycle Greenway in Action"

Our NBG Scouts have been researching the route this book talks about, from San Francisco to Washington DC, since 1997. And it is their work, combined with the advances made in the Google mapping platform that now allow us to show this connection at BikeRoute dot com!

What this book will talk about in future editions, now that we are done scouting a route, is what we are doing to get it known about. Besides encouraging cyclists to ride all or part of it, we will also celebrate the 20 Anchor cities through which it passes.

In the same way that the US Office for Public Roads promoted our National Parks and Forests to get people to drive in the early 1900's, we will use our 20 NBG Anchor cities to get people to bike in them and ultimately to and from one Anchor City to another. In showcasing the cities that make up our route, we have begun the work of fleshing out their sights to see, things to do, places to eat, drink and be merry as well as the bike shops (the gas stations of the future) that do business in them.

Toward this end, in December of 2015, we completed our Virtual Tour of Reno, Nevada, arguably the best road biking city in America. Reno's compelling tour and the rest of our NBG Anchor Cities can be found under the NBG Biking Cities link that runs in the header at any of our BikeRoute web pages.

I am Martin Krieg, a business school graduate of Cal State Hayward and former accountant. I have crossed the country twice on a bicycle after first rehabilitating myself from paralysis, clinical death and a seven-week coma as a result of a car wreck.

In 1979, I rode across America on a standard upright bicycle. On my second trip across America in 1986 I rode a recumbent bike and organized media events, public speaking and fund raising for the National Head Injury Foundation. That ride reached 40 million people amongst my newspaper, public speaking and TV and radio appearances. Upon its completion, to spread the word for the interconnected network of safely bikeable roads and paths I envision called the National Bicycle Greenway (NBG - it became a nonprofit in 1993), from 1987 to 1994, I published 60,000 Cycle America Regional Directories in four different parts of California.

In 1994, WRS Publishing published the book about the experiences described above. Building the National Bicycle Greenway into the story line, I had written and rewritten it for 14 years. Called "Awake Again, All the Way back from Head Injury", it gives credibility to my vision and opens lots of doors for me.

Once “Awake Again” became an attractive hardback book, complete with pictures, I alternated between traveling the country to promote it and learning the excitement of the all new World Wide Web. During this time, I built the first web sites for well over a hundred small and large bike companies. In 1997, from Santa Cruz, CA, I began a campaign to send hundreds of cyclists to Washington, DC, all of which ended with a widely known bike celebration called Cycle America 2000. We brought that excitement back to the West Coast with two large cross-country relay rides both of which ended in the Surf City with huge festivals attended by thousands of people. During this time, I also personally inspired, coached and consulted on over a dozen other successful transcontinental bikes rides.

From Palo Alto, CA, we kept producing our annual National Mayors' Rides and in 2003, we began the Mountain Movers Podcast series. In addition, I also finished “How to Bike America”, kept working on a business plan for the NBG, and poured hours of research and writing into what amounts to the sequel to "Awake Again' called “How America can Bike and Grow Rich, The National Bicycle Greenway in Action” (HBGR).

I took the 2007 Mayors' Ride season off to devise a fully interactive Google mapping system that ran like a game while building community to let users calculate, request, plan, utilize, store, display and vote on bike routes. I did this all toward the end of showing how, in our increasingly crowded world, the internet can now make the bicycle the superior way to move one's self about. My internet service provider, which was based in India, however, scrambled all of our files and lost hundreds of maps people had input to our system.

Refusing to surrender to adversity, in the summer of 2009, in an attempt to call attention to the NBG, in what became a test run because of all the horrific weather (the deserts were water logged), I rode the Eagle HiWheel (http://bikeroute.com/NationalBicycleGreenwayNews/2013/02/23/chapter-excerpt-why-i-ride-an-eagle) the only one like it in active use in the world, from San Francisco to Salt Lake City. In 2010, my Mayors' Ride/Author Tour on the amazing Eagle was put on hold by a car that ruined my bike when it turned left in front of us.

At which point I moved to Ireland, married my wife Virginia, had Baby Cayo, finished HBGR and studied Europe's top Greenway system, the Great Western Greenway (GWG). The GWG was made possible by a joint partnership between the National Tourist Bureau and 14 other public and private stakeholders as led by the Irish National Road Authority.

Forced out of the mapping game when Google started mapping bike routes, in merging their bike travelways with the work of our NBG Scouts, in 2014 we put our full-featured coast-to-coast map on the main page at BikeRoute.com. In the summer of 2015, I returned to America, sans Cayo and Virginia, for our CA Mayors' Rides and landed in what used to be America's top bike city, Davis, CA. After a year of learning the local lay of the land in this small city of 65,000 people (when you don't include its 30,000 students), we determined to make Davis the new home of the National Bicycle Greenway. Toward that end, in early 2016, we began working to create our first Davis NBG Fest. A worthy success, it was held on October 22.

In the build up to our event, Sinead Santich, made me one of the stars in her excellent UC Davis sponsored video about the two-wheel way of life there - https://vimeo.com/158869106.

From Davis, CA, I also worked to celebrate the 20 cities that serve as waypoints to anchor our route from San Francisco to Washington, DC at http://bikeroute.com/SF-DCNBGAnchorCities.php. Some of this work included Virtual Tours that show cyclists where to ride, eat, shop, recreate and sightsee. Here, for example, from the massive Harrahs Casino and Resort, is what we did for Reno, NV - http://bikeroute.com/NationalBicycleGreenwayNews/category/Reno .

The most recent news feature about myself and the NBG appeared in a beautiful 2 minute video that Sacramento based ABC-10 got on to the air waves on Nov 3, 2016 per this link http://www.abc10.com/mb/news/local/davis/big-story-behind-the-big-wheel/346584864

In October of 2017, I landed in Indianapolis, a city with the bike friendliest downtown in America. You can see why this was an easy decision to make here - http://bikeroute.com/NationalBicycleGreenwayNews/2018/01/30/why-has-the-nbg-moved-to-indianapolis

On Feb 11, 2019 my new book "How Indianapolis Built America and How it will Rebuild it with the National Bicycle Greenway" publishes. You can see ii here: https://www.smashwords.com/books/view/917460

You have subscribed to alerts for Martin Krieg.

You have been added to Martin Krieg's favorite list.

You can also sign-up to receive email notifications whenever Martin Krieg releases a new book.