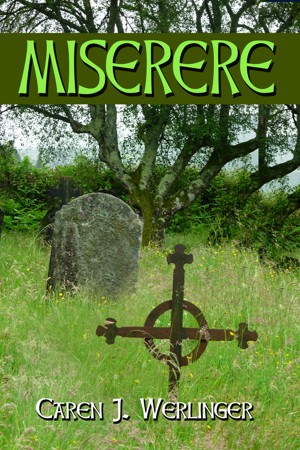 Bestselling author Caren Werlinger published her first award-winning novel, Looking Through Windows, in 2008. Since then, she has published seventeen more novels, winning several more awards. In 2021, she was awarded the Alice B Medal for her body of work. Influenced by a diverse array of authors, including Rumer Godden, J.R.R. Tolkein, Ursula LeGuin, Marion Zimmer Bradley, Willa Cather and the Brontë sisters, Caren writes literary fiction that features the struggles and joys of characters readers can identify with. Her stories cover a wide range of genres: historical fiction, contemporary drama, and the award-winning Dragonmage Saga, a fantasy trilogy set in ancient Ireland. She has lived in Virginia for over thirty years where she practices physical therapy, teaches anatomy and lives with her wife and their canine fur-children.

I was totally swept away by this amazing novel. Miserere opens in 1968 just as the main character, a 10-year-old girl named Connemara (Conn), is moving with her mother and younger brother into her grandmother's house in West Virginia because Conn’s father has been listed as MIA in Vietnam. No sooner do the Mitchells get settled into their ‘new’ 19th century house when Conn starts having dreams — incredibly detailed and emotional dreams — about a 5-generation-distant relative (Caitríona Ní Faolain) who lived in Ireland during the potato famine and was sold by her father into indentured servitude in exchange for five acres of land. Caitríona and her sister are sent to America to work on their Irish landowner's plantation in Virginia. The story slides effortlessly between Conn’s life in 1968 and Caitríona’s life during the American Civil War Era. This book is really an extraordinary time machine in disguise: Not only do you learn first-hand how impossible life was for workers on a plantation, both black and white, but you also get to be 10 years old again. It is an incredibly well-told story — a story of heroism and love in two centuries. And it's a story about family and extended communities and caring. It’s a book I first read electronically, and then immediately ordered 5 copies to give away, to share, and to keep for multiple re-reads. Enjoy!

In MISERERE Caren J. Werlinger has written an historical novel that weaves together narratives from two periods: the mid-1960s dominated by the Civil Rights Movement and the mid-1800s that saw the Civil War and the end of legalized slavery in America. The story centers on the descendants of Caitríona Ní Faolain, an Irish girl brought to America as an indentured servant.

One descendant in particular, eleven-year-old Connemara Mitchell, carries a heavy burden. Only she can lift a curse that began with Caitríona and has afflicted the family for a hundred years. But first she must uncover its secret.

After Conn's father goes missing in action in Vietnam, her mother moves the family to their grandmother's rundown house in West Virginia. Soon after their arrival, Conn sees the ghost of Caitríona, who reveals the terms of the curse. In each generation, one girl child will survive so that someday the curse might be lifted. All her siblings will perish. Soon afterward Conn's younger brother almost dies of polio. She realizes that his life depends on her finding out the secret.

Through dreams and visions Conn experiences her ancestor's life. Caitríona and her sister, Orla, are still children when their father sells them to the ironically named Lord Playfair. After a harrowing trip across the Atlantic, locked in the hold of a ship, they come to a pre-Civil War plantation where they labor alongside the house slaves. They are treated a little better than the Africans, but not much.

Catríona falls in love with Hannah, one of the slaves. The lives of the girls become more precarious as they try to conceal their love from everyone in the household. Catríona doesn't help matters. Quick tempered and embittered, she's whipped for impertinence. Conn experiences the whipping in a dream. Afterward faint scars appear on her back. She discovers a network of tunnels beneath the house and begins to explore, guessing the secret of the curse is hidden there.

Meanwhile Conn's mother, Elizabeth, struggles to make a life in a new place. She hires Abraham Greene to help her fix up the house. Once a schoolteacher up North, Abraham now makes a living as a handyman. He becomes a friend of the Mitchell family. Word gets around, and rumors spread. Some people in the West Virginian town think Elizabeth and Abraham have crossed a line and must be punished.

Werlinger moves skillfully between the two narratives, building suspense in both. Her pacing is just about perfect. The characters are complex, believable, and sympathetic. Her view of human nature seems essentially hopeful and kind, given her compassionate rendering of characters that might have been cartoonish villains.

MISERERE grabbed me and carried me all the way to the end. I put aside everything else and devoted a day to reading it, which is the highest tribute I can give to a story.

It’s 1968, ten year old Connemara Mitchell, (Conn) and her family are forced to move to West Virginia, her mother’s hometown, when her father is reported missing in action in Vietnam. Her grandmother’s old home has been neglected and is run down. It needs a lot of work to make it habitable.

The house is holding untold secrets of previous occupants. Secrets of forbidden love and of times long past and forgotten. Conn has no way of knowing that she is the chosen one. The one selected to take on the task of solving the mystery surrounding her Irish ancestor, Caitriona Ni Faolain.

Caitriona vanished without a trace just after the civil war. At the heart of the mystery is a very real and virulent curse that has taken it’s toll on Conn’s family for over one hundred years. Why has Conn been chosen to solve this mystery after all these years? What is so special about her?

Conn begins to have dreams and Caitriona appears to her. With each dream the mystery begins to unravel a little bit more. But will Conn be able to solve it?
This book is quite simply a masterpiece. Caren Werlinger is without a doubt, a master storyteller. The book is extremely well written and edited. It’s a page turner from start to finish.

The story begins in Ireland around the time of the great potato famine when people were literally starving to death. It goes between the past and the present seamlessly in an easy to follow dialogue. This is a rollercoaster ride of tumultuous emotions that radiates from the pages in waves. Caitriona’s story continues on through and beyond the civil war when it stops abruptly, until Conn is chosen to reveal Caitriona’s secrets.

I really liked the way this book was laid out. It’s actually two stories rolled into one. But the stories are linked together by one person. The person needing redemption.
It’s obvious that an enormous amount of research has been done in order to accurately portray the history of the times. The scenic descriptions enabled me to totally lose myself in the story so I was living it with the characters. The characters themselves were well formed and multidimensional. Each and every one of them played their parts to perfection in order to progress this story through to it’s dramatic conclusion. The fact that the main character is a ten year old child, (going on twenty) is just right. A really good decision of Caren Werlinger’s.

There is a lot more to this book than the actual story from a historical point of view. The time span gives glimpses into how people lived in times gone by. From Ireland to the Vietnam war and beyond.

This is quite honestly one of the best historical lesbian fiction books I’ve read for a long while. I will be adding it to my list of books to re-read.

You have subscribed to Smashwords Alerts new release notifications for Caren J. Werlinger.

You have been added to Caren J. Werlinger's favorite list.

You can also sign-up to receive email notifications whenever Caren J. Werlinger releases a new book.