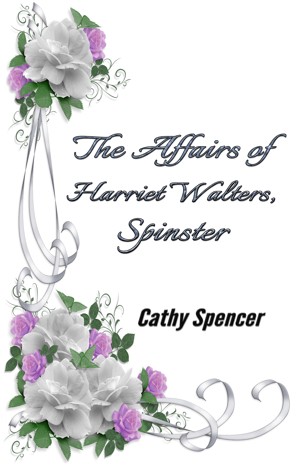 The Affairs of Harriet Walters, Spinster

Welcome to the Regency world, where life is slower, people are more courteous, and men and women still court each other. So pour yourself a cup of tea or chocolate, sit back in your chair, and enjoy an old-fashioned romance.

Award-winning Canadian author Cathy Spencer lives in Ontario with her husband, an actor/teacher.

Cathy is the author of the Anna Nolan mystery series featuring an amateur sleuth who works as an administrative assistant for a fictitious university. Book One, Framed for Murder, was the winner of the 2014 Bony Blithe Mystery Award. In it, Anna discovers the body of her ex-husband while out for a walk one evening, and quickly becomes the focus of his murder investigation. Book Two in the series, Town Haunts, is set at Halloween. Cemetery custodian Sherman Mason asks for help from Anna and her friends when he hears his dead wife calling to him from beyond the grave. In the third book, Tidings of Murder and Woe, Anna is looking forward to a happy Christmas when her new friend, the CEO of a big oil company, starts receiving anonymous death threats.

Cathy has also written two romances. The Affairs of Harriet Walters, Spinster, is an historical novel about a spinster whose life is turned upside when she is sent to live with a persnickety aunt after her father's death. The Dating Do-Over is a contemporary romantic comedy about a thirtyish school teacher with a sympathetic heart and lousy taste in men.

Reviews of The Affairs of Harriet Walters, Spinster by Cathy Spencer

I enjoyed this book, although, as the other reviewers state, there are some plot holes, uncharacteristic reactions and events for the era. I liked the character of Harriet Walters and was interested in her growth as a woman of this time period and her deciding not to be conventional, even when she started out as very conventional. I found the plot predictable but entertaining and I look forward to reading some of this author's other novels.

Its written in an odd style that seems to take a negative view of many of the characters. Unfortunately I didn't manage to reach the magic half way point where the tale reputably improved.

It was certainly as a gust of sweet breeze for me to read this romantic novel because it took me back to my youth when I usually read this kind ofstories with interest.
the plot is correct, really well depicted charcters, the situations are beliavable and I was thinking that it was a bit slow in the beguining , but then I realise d that this was the way that old stoires were told...so I think that is a good read, even an easy one.

I liked the story of the book but I found there were some plot holes and a lot of grammar mistakes. The book took a while to get into, but about halfway through I started to get interested and more invested in the characters.

Great book in the '18 century style. While Harriet is poor and only average in beauty, she has much to look forward to when good people smile upon her. She has many adventures and in the Austen style all ends well. A really go read. I read a lot of books written in this era, and this was true to form

When her father dies and leaves her and her mother homeless due to the entailing of his estate, Harriet Walters is left in a most undesirable state: that of a relatively penniless spinster reliant upon the goodwill of family for a home. Leaving her mother to live with her younger sister’s family, Harriet takes up residence with an old widowed aunt whose personality leaves much to be desired. Though she initially dreads her life in the small town of Rexton, Harriet grows to love the little village and the people she meets there. Her new acquaintances expand her horizons and foster her growing independent spirit. Even more importantly, one leads to a surprising inheritance which gives Harriet freedom that she never dreamed would be possible. Her first use of the windfall is a trip to London, where her developing taste for adventure and desire to see all the world has to offer grows. As a result, Harriet begins her journey down an unconventional yet satisfying path to a bright future.

I was disappointed with this book. Though it is compared to the romantic comedies written by Jane Austen, it falls woefully short of that standard. It is a sweet story but it lacks the witty humor, social commentary and superb characters that make Austen novels such treasures. The plot is slow to start and doesn’t get truly interesting until the end of the first third of the book. I was very tempted to give up on it before then but had committed to read the entire book since it was provided to me as a review copy. If that had not been the case, the story could not have held my interest long enough to incite me to read until the end. The author had a good story basis and solid characters and tells the story well, but the book just lacks a certain something to really engage the reader. I always hate to give a poor review, but I must say that this book left much to be desired. In addition, the kindle version that I received had several (I counted at least fifteen) typos, grammatical mistakes and mislabeled characters (i.e. a “Mr. X” was addressed when really the character being spoken to was “Mr. Y”), which always makes me think even worse of any book. There is no excuse for this many easily caught mistakes! All in all, though not a bad read, one which I wouldn’t necessarily recommend as a top choice.

You have subscribed to Smashwords Alerts new release notifications for Cathy Spencer.

You have been added to Cathy Spencer's favorite list.

You can also sign-up to receive email notifications whenever Cathy Spencer releases a new book.