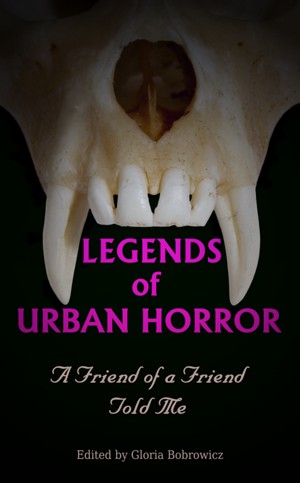 Legends of Urban Horror: A Friend of a Friend Told Me

Maybe the real horror lies in the minds and hearts of others just like you. People with a slightly bent perspective that feed on the fear in others. Twisted souls that would take advantage of the weak, or vulnerable. Those who believe they are doing good for a higher power, or to gain power simply for themselves. Petty vengeance that breathes a life of its own once unleashed.

Whatever your poison, the ten stories in Legends of Urban Horror: A Friend of a Friend Told Me are sure to intrigue, and perhaps bring back fears long forgotten.

Run, don’t look back… or should you?

Urban legends are everywhere. Everyone has one. Some you may hear time and time again, each time the story may change a little but basically it's the same. Then there are myths of local legend. An escaped mental patient here, a restless ghost there, a spirit of a child who cries...you know what I mean. Once you've read one book on Urban Legends, you've read them all. But, this book is different. The twist to this collection of ten short stories is that the writers involved are clever. They know you know, they know that you think you know the ending so, with that in mind, they have taken each tale and totally re-inventing it in ways the reader could never imagine.This is why this collection is genius.
Included:
'Bunnyman': A serial killer finds a new more powerful way to spread fear when he is approached by a man who shows him how he can take small town spook stories and use them to his advantage. You'll never look at bunnies the same way again.
'Never A Bride': A bridesmaids dress is specially made with evil sewn into it's very fabric. Forgotten at the bottom of a wardrobe, it waits patiently for it's next victim while gloating over the destruction it has caused before.
'The Pit': Overhearing a rumour about a pit deep in the woods, a group of kids set out to discover it. What starts out as fun soon has the kids vowing never to return. But,one does. Now a grown man he discovers, first hand, about what lies deep at the bottom of The Pit.
'The Kindness of Strangers': You've heard the one about always checking your back seat before getting in your car. Well, one unfortunate woman finds out exactly why you should and shouldn't do just that.
'The Delectable Hearts': A jaded music journalist finds out why everyone is going crazy for a new band. Can he resist the unearthly pull to become just another one of their groupies.
'The Pier': Take a trip through the weird and wonderful pier. Past the fairground rides that disappear, past the bright awnings of the booths. Try to ignore the people who bring back memories of others. Beware the circus tent.
'Hairy Man Road': Is he real or fake. The Hairy Man's long toenails will make a boy's prank backfire.
'The Bridesmaid': A woman looking for a gown visits a strange store that leaves her with nightmares of bleeding eye pictures and fighting humanoid blobs that seek slaves and worshippers.
'The Curse of The Devil's Tree': As part of an initiation a group of guys are dared to take a cutting from a supposedly cursed tree. False bravado soon turns to tragedy.
'Marrow' A logger awakens an old monster that has been kept hungry for too long.

Altogether a very good collection of stories that are interesting and entertaining. With a fresh take on old legends, just keep telling yourself that it's not real. It's just a myth.

How many of us have heard about an Urban Legend growing up? It could have been a spooky house in your neighborhood, an old road, or even a grassy field, but most of us have heard of them. In some cases we wonder about the origins, or what would happen if we really investigated the legends.

Sirens Call Publications has the Anthology, LEGENDS of URBAN HORROR, A Friend of a Friend Told Me, which features ten such stories. The stories will take you into a legend of a writer’s mind and by the time you are through you will want more.

The stories are well written and each has a unique look at an urban legend, which may or may not be true.

The stories you will find are ones such as the four I touch briefly on below.

We often hear of a place as the cause for a legend and stories of an object occasionally are told. Imagine if that object is something that is often seen on a joyous occasion. The occasion is a day when a couple unites to be one, their wedding day. The outfit I mention is often worn by the best friend of the bride, the maid of honor. Just imagine if there was something associated with that special dress. The dress having a special power that will have others wanting it to be worn, but for a reason some may not see coming. This story is titled Never A Bride.

Over the years there have been rumors of Rock Bands having hidden messages in their music. Some classic albums were said to have messages of a satanic origin when they are played backwards. Combine this rock and roll history with a reporter on the music scene. The writer takes a job to check out a band that seems to defy logic and sells out a local club with no internet content anywhere. What will the report find when he investigate this band, will he enjoy their music? Find out in the story, The Delectable Hearts.

Do you enjoy having your fortune told? How about attending a circus, or carnival that comes through the area? How would you react if a fortune teller refuses to tell your future because you are marked? There could be something to this, and then imagine going through a mysterious labyrinth of a hallway and finding a long lost friend and spending the day with them. Could live get any better, or are things not as they appear. The story, The Pier, will help you find the answers to the questions and take you on a great ride.

The last story I’m going to touch on is one that could be from almost any town. A tale that starts off with a group of young men having to fulfill a task they are given. A task that will take them to a tree that is well known in the area as being cursed. Numerous stories are told about this tree and the young men tempt all they know and go to the tree. What happens to them, are the stories true, or do they over react from shadows? The only way to find out is to read, The Curse of the Devil’s Tree.

There are six other stories within the pages of, LEGENDS of URBAN HORROR, A Friend of a Friend Told Me. These stories will have you thinking back to your childhood, your local town, and about any legends you may know. I know I think back to on a trip I took when in college to the Paulding Light in beautiful Upper Michigan. I may not have had the experience as the people within these pages, but that trip gives me goose bumps after reading these ten stories. As I wonder, what if.

Here is a list of each story and it’s author.

Never A Bride by Lisamarie Lamb

The Pit by K. Trap Jones

The Kindness of Strangers by Kimberly A. Bettes

The Delectable Hearts by C.M. Saunders

The Pier by Morgan Bauman

The Bridesmaid by Matthew Borgard

The Curse of the Devil’s Tree by Alex Chase