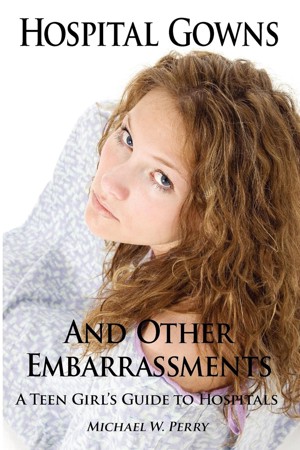 Hospital Gowns and Other Embarrassments: A Teen Girl's Guide to Hospitals

By Michael W. Perry
With needles, strangers, and embarrassing situations, hospitals can be scary places, particularly if you’re a teen girl. I can’t do anything about needles. That’s up to your doctor. But I can tell you how to change those strangers into friends and how to avoid that embarrassment with skill and tact. That’s because I cared for girls just like you at one of the nation’s top children’s hospitals. More
Written by someone who cared for teen girls just like you at one of the top children's hospitals in the United States, this book explains the often confusing world of hospital care. In down-to-earth terms, it helps you to understand the doctors, nurses, and other staff who will be caring for you.

* It tells you how to be a patient that everyone likes and wants to help. Win their hearts, and they'll do a bit extra to make your stay enjoyable.

* It gives you reasons to appreciate those caring for you. Hospital work is difficult and staff are under a lot of pressure. Understanding that can make your visit more pleasant. You'll know why they do what they do.

* It describes how embarrassing situations develop in hospitals and what you can do about them. The better you understand why certain things happen, the easier it will be for you manage events to your liking.

* It gives practical advice for dealing with flimsy gowns, awkward bed pans, visits to the toilet, and other possible sources of embarrassment. It recognizes that teen girls vary greatly in what they consider embarrassing, from casual to careful, and offers advice for each.

* It lists steps you can take to make sure that you stay in control of your care. There's no need to suffer in silence. You can get what you want while still being liked and respected.

* Last but not least, it explains how to deal with male staff kindly but firmly. If the behavior of a guy makes you uncomfortable, it describes in practical terms what you can do to establish a safe distance between you and him.

In short, this book can make the difference between a hospital visit that you try to forget and one that will be a memorable and enjoyable adventure, as well as a chance to make friends among those caring for you.

While this book was written with teen girls in mind, there's also a wealth of practical advice for everyone. That includes parents whose children are being hospitalized, teen boys, and older women or men. Whatever your age or situation, it'll make that hospital stay much better.

Hospital Gowns also makes a great gift for a teen girl who's in the hospital or hospital-bound.

About the Series: Hospital Gowns and Other Embarrassments: A Teen Girl's Guide to Hospitals

Books about medicine and nursing for hospital staff and patients.

Also in Series: Hospital Gowns and Other Embarrassments: A Teen Girl's Guide to Hospitals