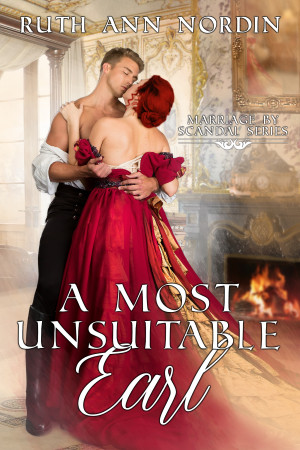 A Most Unsuitable Earl

Rated 5.00/5 based on 3 reviews
Ethan Silverton, the Lord of Edon, prides himself on his notorious reputation as a rake because it frees him from having to get married. But one little lie and a meddlesome mother forces him into a situation where he has to marry the most boring lady he can imagine. More
Ethan Silverton, the Lord of Edon, is very content with his life. He’s carefully sculpted it so that everyone thinks he’s a notorious rake. For years, he’s worked hard to build his reputation to secure his place as the most undesirable bachelor in London. And it’s worked. No decent lady will have him.

But one simple error in judgment has just sealed his fate. His intention was to dissuade a horrid mother from matching him up with her equally horrid daughter. Seeing no one but Lady Catherine without a dance partner, he tells a lie. He approaches Lady Catherine as if they are betrothed, and the ploy works. The horrid mother and her daughter abandon their pursuit of him.

Except Ethan’s mother spies his ploy and is so relieved that she’s found a way to marry him to a reputable young lady that she tells everyone of their engagement. To his horror, word spreads and it’s his duty to see the lie through. This is the worst thing that can happen, and no one but his mother is happy about it. Not Lady Catherine. Not her doting father. Not even Ethan. But his mother is sure it’ll all work out…eventually.
Download: epub mobi (Kindle) lrf more
pdb
Price: Free! USD
Add to Library
Create Widget
Tags: romance love comedy humor regency earl bride groom forced marriage rake fatherinlaw trouble meddling mother wallflower heroine
About Ruth Ann Nordin

It is a fun romance. I wish there wasn't so many bedroom scenes but still a very nice story

Ethan Silverton, the Lord of Edon, has worked extremely hard the past five years….at cultivating a reputation as a rake. A really bad rake. The kind that makes even the pushiest debutante’s mother shutter. And it’s worked so far, very few of the Ton want their precious daughters married to a man with such an nefarious reputation. Until one night at a ball all that changes. Between a momma set on his title and money for her daughter, a tiny lie and his interfering mother he finds his life has changed drastically enough to cause a grown man to swoon.

Lady Catherine Morgan daughter to the Duke of Rumsey has yet to get a proposal even though her dear father has brought about every bachelor around for her that he can find. She may as well plan on giving up her dreams of home and family and accept her spinster status. Just when she has a glimmer of hope at meeting the right man, everything goes wrong. Before she knows it she is betrothed to the only man that would cause her to gladly stay a spinster rather than marry him.

Ruth Ann Nordin has written another outstanding story. Not only does the book draw you in to where you don’t want to put it down until the end but she has filled it with humorous situations. Lord Edon is not quite who he seems to be and the prim and proper, not to mention boring, Lady Catherine has a side to her worthy of his rakish rumors. The characters all have such unique personalities like Ethan’s mother who you may want to lock away, or at least practice using duct tape on, and Catherine’s father who enjoys scaring the heebie jeebies out of poor Ethan. What chance does this marriage have when it seems their parents are continually looking over their shoulders?
**Sexual situations within marriage
http://justjudysjumbles.blogspot.com/2011/09/ruth-ann-nordin.html