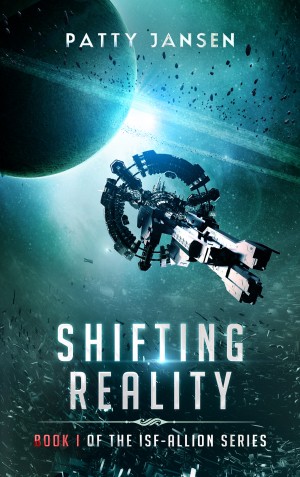 By Patty Jansen
Rated 4.00/5 based on 2 reviews
In the chaos of the worker population on New Jakarta Space Station, Melati needs to find a mind traveller with dangerous knowledge before the enemy can lay their hands on him. More
A few years ago, a military doctor walking the corridors of New Jakarta Station saved Melati's life. She signed up for the International Space Force to pay back her moral debt to him. But her family thinks she has betrayed her people. It was ISF who forcefully removed their grandmothers and grandfathers from the crowded slums of Jakarta to work in interstellar space stations.

It is Melati's job to teach six-year old construct soldiers, artificial humans grown in labs and activated with programmed minds. Her latest cohort has one student who claims that he is not a little boy, but a mindbase traveller whose swap partner took off with his body. It soon becomes clear that a lot of people are scouring the station for this fugitive, a scientist with dangerous knowledge.

The best place to hide in the station is amongst the many cultures and subcultures of the expat Indonesian B-sector. Looking for him brings Melati into direct conflict with her people. She does not want to be seen as one of the enemy, but if the scientist's knowledge falls in the wrong hands, war will come to the station.
Available ebook formats: epub mobi pdf lrf pdb txt html
First 10% Sample: mobi (Kindle) lrf pdb Online Reader
Price: $5.99 USD
Buy Add to Library Give as a Gift
How gifting works
Create Widget
Tags: space opera space clones cyborgs isfallion
About Patty Jansen

I thoroughly enjoyed this novel and found the characters and complex relationships to be distinctly believable. Science fiction can still be speculative about the science, but if the characters are not real, it makes the speculation even more remote. I hope to find time to read another installment.

Shifting Reality is a science fiction novel set in ISF-Allion Universe that Patty Jansen has been developing over the last couple of years. Other works in the series are Luminescence (novelette), His Name in Lights (novelette) and Charlotte’s Army (novella).

I mentioned in my review of Luminescence above that I wanted longer works set in the ISF- Allion Universe and while I don’t think Patty was specifically listening to me, she has steadily delivered, writing Charlotte’s Army and then Shifting Reality.

Shifting Reality is the tale of Melati Rudiyanto the granddaughter of expat Indonesians who form the labour force on the aging space station of New Jakarta. The space station comes under ISF(International Space Force) jurisdiction and Melati joined the an ISF training program to repay a debt to the Doctor who saved her and to give herself a chance at a better life. Her family sees her as betraying them and her people. She sees them as stuck in the same cycle of poverty, unwilling to take advantage of the opportunities on offer.

He job is to train/teach human constructs (clones) through their accelerated growth period. The action begins when one of the clone children displays an understanding of adult concepts and language that he should not have yet developed. Melati’s concern and care for the children in her charge leads to an unravelling of a larger station threatening plot.

What I particularly like about Jansen’s science fiction (she writes hard–sf as well) is that it’s rare that the tech or the science is the reason for the story but when it does surface, it’s well thought out, realistic and logical. It makes for a quick immersive read with no oddities to drop you out of the immersion.

What I particularly like about Shifting Reality is the choice to have a person of colour and a woman as the central character and that she is a teacher. It’s refreshing to have a protagonist who is not military special forces in high tech spandex.

I don’t know enough about Indonesian culture(s) to know how well Patty has transported it to the life on board a space station but she does a convincing enough job of playing off tensions between family, work and the wider community for me.

While Shifting Reality sits somewhere within the sphere of military science fiction I like the focus on the other aspects life at New Jakarta Station : tourism, refugees, organised crime and human trafficking.

I also like the way in which Jansen slowly builds her “world” with each outing, enabling the attentive reader to pick up on actions and outcomes that occurred in earlier works.

If you are looking for something less over the top than space opera, but still with a broad scope. If you are looking for something with a solid scientific under pinning that’s different to all the “square-jawed Marines save space” narratives, then I think you should check Jansen’s Shifting Reality out. But I'd also recommend reading the entire ISF-Allion series of works to appreciate the scope of the “world” Jansen has devised.

This book was provided by the publisher.

You have subscribed to Smashwords Alerts new release notifications for Patty Jansen.