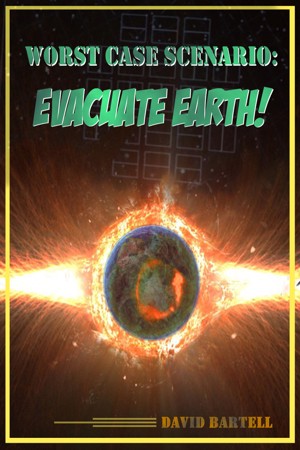 By David Bartell
An unofficial companion to the National Geographic television special, "Evacuate Earth". A rogue neutron star is headed for our solar system. Total destruction of the Earth is certain. Can we work together to design, assemble, supply, and launch a starship? Can some fraction of humanity be saved by evacuating the planet? This book is an insider's look at the docudrama. Includes photos. Now Rev 2! More
National Geographic's "Evacuate Earth" is a two-hour docudrama that combines live-action scenarios, CGI, and cutting edge science. It asks the question: could a viable population escape the planet in the face of impending destruction? The premise is scientifically plausible - a rogue neutron star is speeding through space, aimed right at us.

There is little time to revolutionize our technology. We must rely on what we already know, what we can readily build. The show explores astronomy, medicine, sociology, ethics, engineering and other facets of such a project. The New York Times says that "Evacuate Earth" is "consistently interesting."

"Worst Case Scenario: Evacuate Earth!" is a companion to the show that fills in a number of topics and asks new questions. Written in a simple, conversational style, it is intended for the lay reader, though there are interesting twists to several scientific topics as well.

The book includes production notes and photos, some exclusive.

NEWS: This show is now a series, HOW TO SURVIVE THE END OF THE WORLD, debuting Fall 2013 on NatGeo.

David Bartell is an award-winning science fiction author, futurist, and member of SFWA. He has sold numerous stories to professional magazines and anthologies. In 2011, he appeared in the Discovery Channel "Curiosity" episode, "Alien Invasion: Are We Ready?" with Michelle Rodriguez, Michio Kaku and others. The UK title was "When Aliens Attack". In 2012 he appeared in National Geographic's "Evacuate Earth", and its 2013-2014 spin-off "How to Survive the End of the World", for which he also consulted.

His latest story takes place in Larry Niven's Known Space universe, in the anthology MAN-KZIN WARS XIII. If you are a fan of Niven, kzinti, or stasis boxes, check out "Zeno's Roulette".

David has a degree in astrophysics, a masters certificate in project management, and is a manager in the high tech industry near Washington, D.C. He is a world traveler, scuba divemaster and father.

You have subscribed to alerts for David Bartell.

You have been added to David Bartell's favorite list.

You can also sign-up to receive email notifications whenever David Bartell releases a new book.