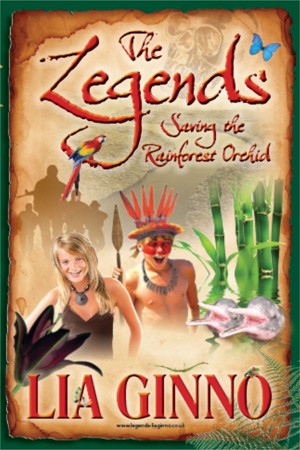 The Legends Saving The Rainforest Orchid

By Lia Ginno
Katelin sends for Calum and his magical powers, asking him to make her invisible and discovers a plot about a legendary black orchid. At the same time they receive an urgent call by dolphins via Shaman Rani, Katelin’s great grandpa, about a stolen crystal skull that must be retrieved quickly; so they enlist the help of the rainforest spirit and encounter a mysterious tribe of woman warriors. More
The Legends, Katelin and Calum, embark on another fantastic adventure when dolphins call them deep into the Amazon rainforest. An archaeologist unaware of its catastrophic powers has stolen a crystal skull; also the children have discovered a sinister conspiracy to exploit the rainforest’s legendary black orchid. In a pursuit against time to find the skull and save the orchids, Calum is helped by a young mysterious girl. After getting lost, the children come upon the family of the young girl, a mythical tribe of female warriors, who are protecting biblical artefacts and they ask the children to help retrieve two more crystal skulls. Promising to return later, the children race off to save the extinction of the black orchid and are swept into a dangerous world of commercial greed.

I am often asked what inspired me to write? It was my English teacher at secondary school and later my sister and the support of my husband. My English teacher Mr. Davenport, nearly always picked my ‘essays’ to read to the class. He encouraged me to write, saying I was really clever at it. As I was a child that was not ‘clever’ at much, especially as my two sisters were, according to my parents, I clung onto this, focused on writing stories like the books I read, and I deeply wanted to be a journalist. Looking back, my parents used to call me a dreamer; I think it was because I had such an awesome imagination. I often escaped into another world full of adventure and magic. I spent a lot of time in my bedroom scribbling (we had no TV until my teens) I also loved our local library and would visit it every Saturday and pour over books and plays. I fancied writing a script then; not sure for what exactly until we got a TV, then I knew!
I had to leave school early at fifteen, but I needed to learn shorthand and type to be a journalist! Therefore, I started night school. My mother said because my spelling and English was so bad (and still is) I would never be able to do proper shorthand, I was wasting my money, and my father said I was not bright enough either. Discouraged and feeling a thicko; I gave up night school, and before I knew it, I was married and did no more writing until I moved to Cornwall with my husband and two teenage daughters and then became ill with long spells ‘resting.’
I think my love for the sea, the mystical Cornish landscape with fascinating sacred places and ancient folklore there, started my head buzzing with stories. I never finished a story to start with; but with the support of my husband and encouragement from my young sister, I began my first novel in the LEGEND Trilogy - The Legends and the Inca Crystals. The stories are all intertwined with myths and legends of real locations.
My one regret in life is that I gave up on my writing dream when I was young, thinking I was not clever enough and not able to do it. I know I never had the right educational opportunities too but if you want to do something, you should not do it because of lack of confidence, determination can win the day - otherwise you have already failed! Although my books are not bestsellers, I have a lot of fans that enjoy my stories. I also realize that to finish writing a book is more than an achievement in itself, even very clever people are unable to do that!
To any young person clever or not, if you like writing get on with it! If you want to do something, anything, try, because you can do it. It might not be like you imagine and you might not be the best…. but doing it and finishing something is more than most!

You have subscribed to alerts for Lia Ginno.

You have been added to Lia Ginno's favorite list.

You can also sign-up to receive email notifications whenever Lia Ginno releases a new book.