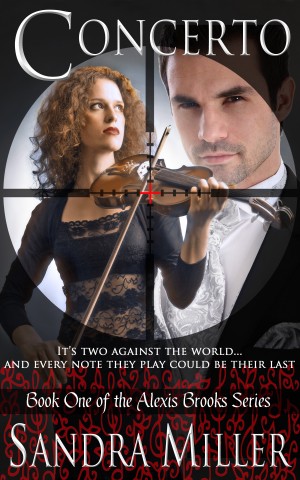 By Sandra Miller
Rated 3.59/5 based on 17 reviews
He's super talented, internationally famous, available...and accused of murder.
She's got a new gig in a new town, new friends...and a new stalker.
It's the two of them against the world, it seems...
And every note they play could be their last. More
"I see you."

Three simple words from her telephone in the dead of night send violinist Chrispen Marnett's life spiraling in directions she never imagined. The chance to work with the greatest violinist alive drew her to Newton fresh out of college, but nothing could have prepared her for what she found there. Terror lurks in innocent places--a ringing phone, a late-night rehearsal, unexpected flowers.

And what could have prepared her for Alexis Brooks: powerful symphony concertmaster, rich international superstar, and accused murderer? Withdrawn and moody, Alexis is cut off from everyone around him; his colleagues in the symphony, his fans, even his own father. Everyone from her mother to the Newton Police has warned Chrispen against Alexis, but as her own danger increases, he may be her only ally.

Join Chrispen on the journey of a lifetime as she fights for her sanity, her happiness, and her life. To survive, she must unravel the layers of the past and uncover the dark secrets the Newton Philharmonic Symphony Orchestra hides.

Concerto is a romance suspense thriller, delving into the world of music and the dark psychological realm of fear.

Sandra Miller is an author. She's that girl you knew in school who always had a notebook in one hand and a pen in the other, and spent every spare second experimenting with ways to put them together.

Her poetry has appeared at Storyhouse, and one of her poems won the Grand Prize in the FictionAddiction 2002 poetry contest.

Her non-fiction articles have appeared in Writer's Journal, Music for the Love of It, Antiques & Collecting Magazine, Writing World, Vision for Writers, and Writer's Forum, a Writer's Digest publication.

She can be found on the web at www.sandra-miller.com

Nice romantic thriller. Violinist Chrispen Marnet has been a fan of Alexis Brooks as long as she can remember. The reason she joined this particular orchestra was because she would be playing along with the world famous virtuoso. As she becomes closer to Alexis she realises that there is a large cloud of suspicion hanging over him for his wife's murder. Chrispen knows Alexis had nothing to do with it and sets out to prove it not realizing the real killer is stalking her.

The main protagonist in this story is Chrispen who is a violonist in a symphony. Chrispen has moved to a new city to join the symphony in order to get a chance to work with Alexis who is a world-famous musician. Alexis is also a suspect in his wife's murder. Chrispen does not believe that Alexis is a murderer and is willing to do anything to prove this. She has just started getting close to Alexis when things take a wrong turn. She starts being stalked by someone who keeps leaving her messages.

Sandra Miller has written an interesting story. However, there are parts which are hard to believe. For example : Chrispen keeps destroying all the evidence of a stalker and still expects the cops to believe her.

All in all it is a good read.

Interesting story, I liked it. The best parts were the descriptions of the orchestra, theater, musicians and instruments.

Short and catchy novel. I'm a musician myself, and loved the way the music makes it through the mystery. Sandra portraits very well the feeling of being stalked: the horror, the insecurity, not being able of feeling safe in your own home.
The romance part feels a little too cliché and obvious, but makes sense in the plot.

Chrispen 'Chris' Marnett is a violinist that has recently moved to Ohio to join the Newton Philharmonic Symphony Orchestra so that she can work alongside the greatest violinist alive, Alexis Brooks, the symphony's concertmaster. What she gets - in the form of creepy phone calls, harassing written messages, unwanted flowers and frightening nightmares - is enough for Crispen to lose considerable sleep and to start looking over her shoulder constantly. When everyone, including the police, seems to be warning Crispen to stay away from Alexis, she decides that she needs to get to the bottom of not only the business of her current terror, but a murder that occurred 5 years previously.

Told from the point of view of Chrispen, I enjoyed the suspenseful build of fear that was generated as the menacing stalking continues to pierce and invade Chrispen's world with apparently no boundaries or protection. I found the use of the nightmare sequences to be a great way to introduce a further element of suspense - and mystery - to the story. For me, I enjoyed the plot, the character development and the suspense created in the first half of the book. I also enjoyed the glimpse into the music world that Miller provides. The second half of the book didn't continue to capture my attention like the first half did, in part because I started to find Chrispen's character annoying and not someone I was a willing to cheer on the sidelines for, but that is just my personal pet peeve. Other readers may have no problem with Chrispen's motivations and decisions. I also found the plot got rather thin in the last third of the book.

Lia and Veronica are two best friends who are trying to keep their favorite hangout from closing down by organizing a benefit concert. Veronica is a senior in high school who is not sure about what she wants to do with the rest of her life while trying to play in her best friend’s band and dealing with high school. The book is set in the summer/fall of 1994 before the Internet and cell phones became widespread. Lia’s brother Jake is also home from college as well where he was the child prodigy. Veronica feels better when Jake does not know what to do with his life as well. The book takes an interesting book at high school in the early nineties where there are some things that do not change such as rivalries.

It's different from most books I've read. Well put together.

Concerto is a fast paced murder mystery that captured the reader on page one. Once I started it was hard to put it down - a fun and easy read. Each of the characters seemed to come alive. It was a thriller blended with some romance and lots of information on the workings of an orchestra. I really enjoyed this book!

*Concerto* is a thriller romance in three movements. The narrator, a violinist in the Newton Symphony Orchestra in Ohio is the victim of stalking and harassment ,and she must continue to do her job there working out who really is violent. The suspects narrow to members of the orchestra but it is certainly not the talented Alexis to whom she gives her heart quite early in the story.

I enjoyed reading *Concerto*. Its setting - a working orchestra - was intriguing and the villainous action just believable enough to hold me. I wondered whether the book would have worked better in the third person. The first person telling tends to diminish the emotions like fear as the mind too quickly provides reasons to mitigate the rawness of the emotion.

You have subscribed to alerts for Sandra Miller.

You have been added to Sandra Miller's favorite list.

You can also sign-up to receive email notifications whenever Sandra Miller releases a new book.