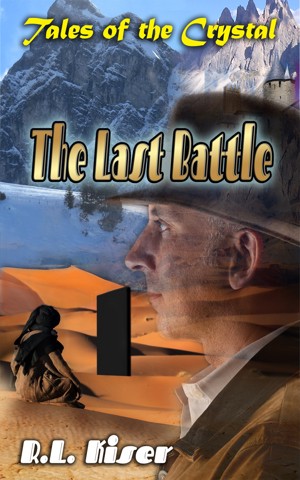 By R.L. Kiser
Rated 4.50/5 based on 2 reviews
An epic tale of magic and warriors in a desperate race against superior forces to save the center of all civilization. More
The deep desert, a vast wasteland, holds the secret of the forgotten Goddess Narine, discovered by young Crystal Warrior Darian. But before he can locate a third hidden obelisk, which will allow them entry into the chamber of the Twelve Tablets, he is recalled to defend the center of civilization, the Crystal, under magical attack from unknown forces. He vows to return but for now he and others must overcome time and distance to battle a force four times their number where they will be forced to use a devastating weapon band long ago

Also in Series: Tales of the Crystal

Imagine a world where all magic stems from a single source; a crystal filled with the knowledge of thousands of souls of generations past. Then imagine that the source becomes the object of desire of the most sinister being in the land; an ancient dark arts user who wishes to use the crystal to commit unspeakable acts of terror. In The Last Battle, the second edition in the Tales of Crystal series, author R. L. Kiser follows the lives of dauntless warriors who are willing to defend that crystal at any cost, even if it means using a destructive weapon that has been forbidden for ages.

The Last Battle is a riveting legend that tells the timeless tale of the fight between good and evil, light and darkness. Kiser creates dynamic, unforgettable characters that are courageous, powerful, and intriguing. His vast universe, which he describes using beautiful poetic imagery, is a living entity itself, acting as much on the characters as they act on it. The picture of his story and its culture that he paints is all at once unique, enticing, moving, and spellbinding.

At times, however, the novel is slow-paced and fraught with lengthy details that do not advance the action or give information about the character. In these instances, it is difficult for the reader to move forward because of the excessive exposition and limited dialogue. On the other hand, the novel sucks the reader in immediately and leaves them hungry for more. As a result, those who appreciate well flushed out characters and expertly crafted worlds will find the novel to be an enjoyable, effortless read.

I highly recommend this book to any fan of the fantasy genre, especially those who love The Chronicles of Narnia and Harry Potter.

Excellent story. I devoured this book in a day and a half.

If you've read Crystal Fire, you'll recognize many of the characters in The Last Battle as their younger, less scarred selves. And yes, this is the last battle referenced in that work.

Norsemen armies are gathering under the malevolent eye of the evil witch, Thisrena, but after generations of peace and prosperity, the leaders of Crystal City find themselves struggling to prepare their undermanned defenses for the imminent invasion.

In the City, Tarina, Macon and Rowan kick the training of the newest recruits into high gear, shifting much of that effort into a dangerous plan that may be all that stands between the Crystal and the northern hordes.

In the desert, young but talented Darian falls in with fellow Crystal Warrior Tyros, when they find themselves fighting over the same horse after receiving their separate urgent recalls to Crystal City. Darian has an interesting backstory, one that becomes important in the next Tale of the Crystal, The Twelve Tablets. The cammaraderie between these two is natural and humorous.

In the North, Glynnis, a former healer in the service of the Crystal, sets out for Crystal City with his own goals in mind. On the way, he meets and joins Reynos, a spy who is returning to Crystal City to report on the movements of the Northern Army.

Will Crystal City's defenders turn back the hordes? Will Glynnis succeed in his diabolical plans? Will the nameless Evil strike a fatal blow against The Crystal?

Overall, I enjoyed the banter between the various characters, the insight into the hierarchy of the Crystal City, and, of course, the intrigue behind the battle between the forces of good and evil. Well done!