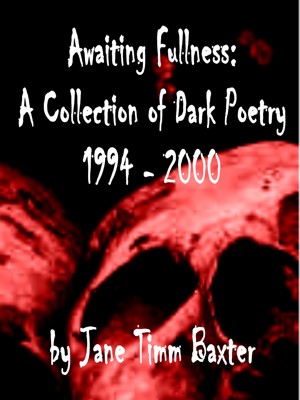 Rated 5.00/5 based on 1 reviews
Printed in chronological order, Jane Timm Baxter shares her horror poetry written from 1994 to 2000.

The true infant Jane was replaced with a mischievous, occasionally malevolent, fey changeling in 1976, who grew up contemplating how she could use her powers without divulging her true nature. In 1995, she tricked human James Baxter into marrying her, and then meticulously began to write down the chronicles of her ancestors. Disguising her work as fiction, the creature known as Jane Timm Baxter finally achieved her goal of infiltrating the world of publishing when she decided to publish and market her work in e-book format. Currently, she is continuing to encode secret messages to her kin in the form of “novels,” and believes that world domination is just a few more words away.

In her rush to “fit in” among the humans, Baxter unfortunately chose a human vessel that is less than efficient in the realm of health. Having not expected such an ongoing battle with her vessel, Baxter is currently limited in the time and energy she can apply toward her goal of world domination through art and writing. To aid her in her schemes, she employs the mischievous help of “The Chi-Baxter Pack” – four fairy spirits inhabiting the tiny bodies of canis familiaris chihuahuas. At this time, nothing else may be revealed concerning the true nature and mission of The Chi-Baxter Pack, under penalty of death.

Those who are familiar only with Jane Timm Baxter in her human disguise, frequently describe her as any and all of the following: interesting, weird, amusing, annoying, talented, dark, disturbed, sick (as in physically ill,) sick (as in mentally ill) and unique. Whether or not any of these words are accurate descriptions of any part of Baxter remains to be proven

As it says, it is a collection of horror poetry, and it is captivating. It takes the reader into other worlds, worlds where you do not want to linger for too long. It is dark and gothic.

You have subscribed to alerts for Jane Timm Baxter.

You have been added to Jane Timm Baxter's favorite list.

You can also sign-up to receive email notifications whenever Jane Timm Baxter releases a new book.