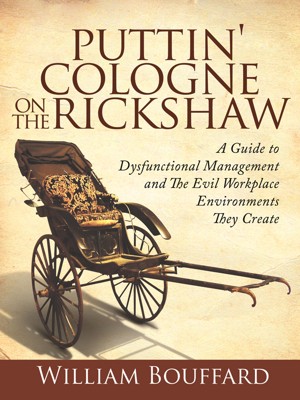 Puttin' Cologne on the Rickshaw

Mr. Bouffard is an accomplished leader whose common sense and instincts have made him a success in a wide array of firms, from Fortune 500 companies to start-up enterprises. Mr. Bouffard has exceled using his genuine, down to earth, hands-on leadership style which has allowed him to be successful in a variety of industries and demanding business environments.

Mr. Bouffard is a retired management executive who has spent much of his career in positions overseeing people at differing professional levels. His exposure to the oftentimes absurd and brutal world of management provided the experience, insight and backdrop for this book. The idea for this book started ten years earlier as he witnessed the management suite becoming more and more competitive, uncivil and cut-throat and taken over by the sociopathic element of our society. People entering business need to know what the modern workplace is truly like.

In his career Mr. Bouffard worked his way up from very humble beginnings to the executive management suite observing, and being forced to participate in, all the political and personal games that are played, day in and day out, in the average workplace. With this in-depth knowledge and first-hand experience he is in a unique position to write a tell-all confession exposing the modern workplace in its true form.

Mr. Bouffard hopes the reader will take away an in-depth appreciation of the complexity of the behaviors typically observed in the workplace. By doing this the reader, if new to the world of business, can prepare for the inevitable abuse they must endure to be successful.

Mr. Bouffard lives in San Diego, California, with his wife Mary. He has two children and four grandchildren. This is his first book.

Reviews of Puttin' Cologne on the Rickshaw by William Bouffard

You have subscribed to alerts for William Bouffard.

You have been added to William Bouffard's favorite list.

You can also sign-up to receive email notifications whenever William Bouffard releases a new book.