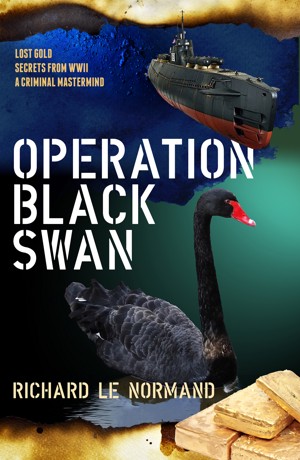 By Richard Le Normand
Rated 5.00/5 based on 1 review
1942 Japanese invasion of Australia was imminent, panic decisions were made to conceal arms and gold bullion ready for resistance forces.Army officer established a hidden cache but were killed before revealing hiding place.Years later,the cache was found by a crook, he decided use an old wartime submarine to remove the gold.A British Army officer is sent to help police foil the criminal's plans. More
In 1942,on the brink of a Japanese invasion, two Australian soldiers were dispatched to the Myall Lakes to establish a secret arms and gold bullion cache, but were killed by a Japanese submarine on there way back to base. The location was lost for ever. In 2008 a criminal accidently found the cache. He decided to use an old wartime submarine to steal the gold. Captain Marcel Beaumont on holiday, saw a human hand in a black swans beak. He joins local police to track down the killers and discovers the gang who murdered the girl. Sophie has followed a London solicitor who is in charge of the gang and the bosss man tries to escape in a submarine with the gold. In the course of events, Sophie falls in love with Marcel.
Available ebook formats: epub mobi pdf rtf lrf pdb txt html
First 15% Sample: epub mobi (Kindle) lrf more Online Reader
pdb
Price: $2.99 USD
Buy Add to Library Give as a Gift
How gifting works
Create Widget
Tags: look sir dolphins aheadyes and look behind you sergeant a jap submarine is surfaceing andthe gun is manned
About Richard Le Normand

Richard was born in Jersey in June 1927.Educated at Victoria college Jersey 1936-1944.In July 1940 German forces occupied Jersey until 1945. After the war he trained in England and became a Jersey farmer, glasshouse-grower,flowers,tomatoes etc. Then Richard established a Plastics factory in Jersey.He retired to Australia 1987 then worked in real estate, designed attachments for boats and finally took up writing novels.Richard has published six books.

Great book, Suspense grabbed me right from the start. Thanks Richard!

You have subscribed to Smashwords Alerts new release notifications for Richard Le Normand.

You have been added to Richard Le Normand's favorite list.

You can also sign-up to receive email notifications whenever Richard Le Normand releases a new book.