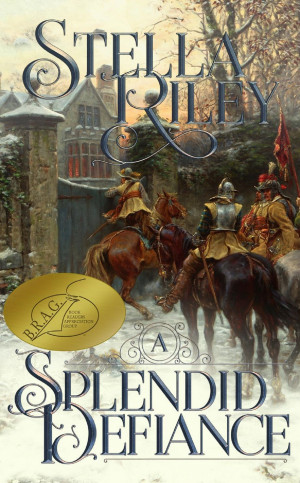 A ‘Splendid’ Novel
In the mid 1980’s I was living near Banbury, Oxfordshire and by chance came across a copy of ‘A Splendid Defiance’ written by Stella Riley. I remember reading it and then taking a walk through the town in an effort to track the routes she described. It wasn’t difficult. Nothing had changed in the layout, from the street names to the Reindeer inn and even the Globe room. All was immaculately captured in what I consider one of the best Civil War novels I’ve ever read.
This book is a sheer delight from the start to finish with an outstanding finale and because of it Stella Riley has become one of my favourite writers.
So, following the publication of her previous works on e-reader, I am absolutely delighted that she has now republished this book.
Set in 1644, the book describes the siege when some 300 Royalists held out against 3500 plus Parliamentarians for close on 4 months before Charles 1 was able to send a relief force.
The book starts with the hero Justin Ambrose who has been sent to Banbury as punishment because of an indiscreet remark about George Digby whose advice King Charles mistakenly followed throughout the war. Bored and irritable, Justin’s character is utterly believable as he demonstrates his frustration at not being in the front line of battle whilst still maintaining his position as a professional soldier and also his steadfast belief in the Royalist campaign.
In the town lives Jonas Radford along with his wife, mother, brother and sister, Abby. Jonas is a well to do merchant as well as a firebrand Puritan who rules over the household with a rod of iron.
The lifting of the 1644 siege allows the town to become more stable and gives Justin the opportunity to meet Abby. It also allows him to come across Jonas – to whom he takes an instant dislike. This serves well for later as the relationship between him and Abby develops.
However, against this is the real Civil War and Ms Riley does not lose sight of the true events and the real people. We hear about Marston Moor plus other conflicts in these turbulent times. We meet and speak with Price Rupert of the Rhine, his brother Prince Maurice and John Lilburne plus many lesser-known figures including Sir William Compton, barely 20 years old but commanding the Garrison.
The way in which the real events are intertwined with the relationship between Justin and Abby is glorious. I thought the story lines, supported by Justin’s own family issues, were really well conceived; the scene with Justin and Hannah Rhodes was gripping and the love scenes between himself and Abby gave me a frisson - quite delectable.
So when the second siege begins, the inevitable surrender of the Garrison occurs and true love prevails, we are set for a finale that is probably one of the best and most emotional moments I have ever read.
Without giving too much away, I suggest that you have a tissue to hand.
I particularly liked Ms Riley’s final paragraph in her historical notes:
‘Banbury Castle was one of many such strongholds, held against tremendous odds and at enormous cost by ordinary men whose names are scarcely remembered now. This book is a small tribute to some of them.’
Well done Ms Riley. Another outstanding piece thankfully republished on e-reader. Please keep them coming.