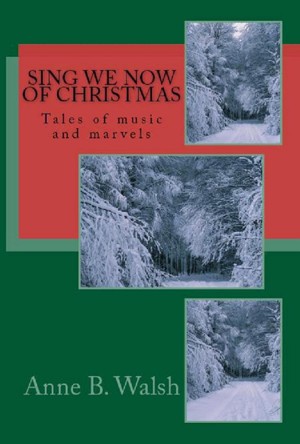 Sing We Now of Christmas

"Laeti Triumphantes": Isabel de Maine and Nevan O'Grady find they have similar taste in carols... what else will they share at Christmas, 1786? From the Chronicles of Glenscar.

"Glorious Song of Old": Eleven-year-old Carol lives on a world without music, but that doesn't stop her from wanting it. When a starship set up as a zoo comes to her planet deep in December, she discovers a secret about the creatures on display. The spirit of Christmas prompts her to set the captives free, but that might mean her own dreams will never come true...

"The Angel and the Rose": Lady mage Cecily Ashe and her betrothed, Barnabas Lecomte of the Order of Middle Knights, invite you to a ball in honor of their Christmastime wedding. Commoners, or those without magic, need not apply. Come in costume, from a story you doubt the other guests will know. But keep your wits about you, for at this ball, nothing is as it seems...

I came to Anne's work through her Harry Potter fanfiction, which is unfortunate for this anthology as the third story is a thinly-disguised rewrite of a fanfiction piece that I prefer as the fanfiction, I think because the characters have the associated histories/backgrounds. Here, the secondary characters just fell flat for me - most noticeably Guinevere, who was Bellatrix in the fanfiction and therefore, although she did and said basically exactly the same things, there wasn't that history to make me think "Oh crap - somebody's going to get hurt here". For a menacing secondary character to work, you have to have menace there, and that's where it fell over... because it just didn't. This was also a problem with the character who was originally Lucius, and whose name in this story I cannot even remember.

Anyway. That was supposed to be constructive.

I couldn't find a story in "Laeti Triumphantes" either, and didn't enjoy it.

With that said - the second story in the set, "Glorious Song of Old", gave this anthology its three stars all by itself. I cannot give the anthology five stars because only one story is five-star worthy, but that one story is good enough for the anthology to receive three. I have been considering a purchase of Killdeer as the novel of Anne's I am most likely to enjoy after reading the Amazon excerpts of all three; on the basis of this tale, set in the same world, I may just have to do it.

I'm always a little nervous when it comes to volumes of short stories. They are usually so variable. Such was the case here.

I really enjoyed "Glorious Song of Old". It is about a young girl named Carol who has grown up in a world where music is banned. She has vague memories of music and has a talent for it so she feels a great longing for this forbidden fruit. A traveling exhibit of aliens comes to her dark and depressing world and she finds a kindred spirit ... and then some. This story struck a chord with me.

"The Angel and the Rose" is a costumed Christmas wedding with quite a twist. Interesting, but not quite my style.

I couldn't even find a story in "Laeti Triumphantes". Seems like something is missing, perhaps?

As I've come to expect from Anne Walsh, her work is brilliant. I highly recommend this book!