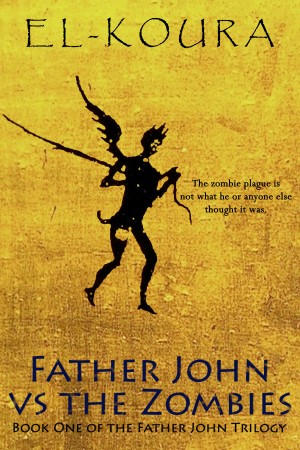 Father John VS the Zombies

By Karl El-Koura
Rated 5.00/5 based on 1 reviews
The zombie apocalypse from a Christian perspective, about a man who must try to protect his wife and daughter in a world suddenly turned apocalyptic. More
An End Times Novel of the Zombie Apocalypse

Civilization has collapsed. The world is dying.

It happened very fast. Within weeks, isolated news reports of people acting in strange and often violent ways became frequent and widespread. Terrifying videos were uploaded to the internet in shocking numbers from across the globe. Chaotic images of societies in rapid decline.

Then—everything went dark. No electricity, no internet, no broadcasts on the emergency radio station.

Now—howling, angry, bloodied creatures claw to get into Johnny Salibi's house, where he lives with his wife and young daughter.

But Johnny and his family are safe. He's boarded up the windows. The door is locked and secure. They will ride things out until the government can get things under control again. They're safe. . .

Johnny must try to protect his wife and daughter in a world suddenly turned apocalyptic. But things will not go according to plan. Johnny will learn that the zombie plague is not what he or anyone else thought it was. He will learn that the government is not in any position to rescue them. And he will also learn that an unlikely group of survivors might hold the key not only to survival, but to salvation.

Combining elements of zombie fiction, apocalyptic literature, and spiritual thrillers, this is the gripping tale of a man whose faith in God is put to the test with life and death—and even greater—consequences.

Karl El-Koura was born in Dubai, United Arab Emirates in 1979 and currently lives in Ottawa, Ontario (Canada). He has published more than sixty short stories and articles. Karl holds a second-degree black belt in Okinawan Goju Ryu karate, is an avid commuter-cyclist, and works for the Canadian Federal Public Service.

Karl maintains an online home at http://www.ootersplace.com, where you can discover more work by him and keep up-to-date with his latest news. He can be reached at karl@ootersplace.com.

About the Series: Father John Trilogy

1. Father John VS the Zombies

2. Bishop John VS the Antichrist 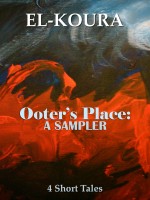 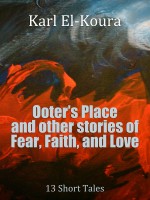 Having read the second volume in the Father John trilogy, I picked up the starting point, this one with the zombies. I've encountered a lot of atheists who are more afraid of a zombie apocalypse than eternal damnation, so Father John adds some timeless perspective by blending both into the mix. In the realms of utter misery, one of these would be over in a flash, unlike the other, right? Maybe not so fast, at least if you're a survivor, as this embattled circle huddled inside a Greek Orthodox cathedral must face. Who would have thought religion-based science fiction could be so thrilling? (OK, not exactly sci fi but close enough to count in its futuristic view.) The covers for this series, though, don't do the books justice.

You have subscribed to alerts for Karl El-Koura.

You have been added to Karl El-Koura's favorite list.

You can also sign-up to receive email notifications whenever Karl El-Koura releases a new book.