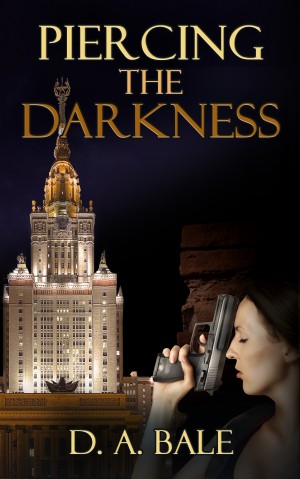 Samantha Bartlett is running for her life. Haunted by her past actions and with nearly every government agency on the manhunt, Samantha lives alone and off the grid. But those who have come under her care won’t let her simply shove them aside. Surrounded by the unlikeliest of humanity, Samantha still feels the sharp sting of loneliness, but for the first time in years she also tastes the sweetness of freedom – for the moment.

For FBI Agent Joe Roberts, Washington D.C. has become too dicey since President Warner’s murder – and a constant reminder of his encounter with their primary suspect. An opportunity arises to continue investigating Oleander Enterprises and what has become known as the Hitler Survival Conspiracy. Key documents are making their way from classified vaults back to where experiments first took place. Joe stops at nothing to intercept them, even when his actions place him on the Elite’s short list – and the FBI’s.

Debrille’s plans for an Elite Empire are nearing fruition, but without the brilliant Dr. Marcus, his life’s work threatens to crumble. The Bartlett woman needs to be silenced before ruining his carefully devised schemes. Debrille is tired of games with mere jokers, but the ace is in position – and only waiting to be played.

Life is filled with tragedy and Ms. Bale's writing reflects this reality. However, there is always a silver lining...even if one must spend their entire life searching for it.

In her previous career, Ms. Bale traveled the United States as a Government Relations Liaison, working closely with Congressional offices and various government agencies. This experience afforded her a glimpse into the sometimes "not so pretty" reality of the political sphere. Much of this reality and various locations throughout her travels make it into her writing.

She dreams of the day she can return to visit Alaska.

About the Series: Deepest Darkness

How far will you go to seek revenge?

Reviews of Piercing the Darkness by D. A. Bale

Piercing the Darkness is the second book of a planned trilogy, the first being Running into the Darkness and the third tentatively titled Rising from the Darkness (which the author is currently working on and hopes to release later this year).

The books are a continual series (one main story as opposed to recurring characters in unconnected stories) and it is assumed people will have read the first title before the second. Indeed, the second book (and review) contains major plot spoilers for Running so if you’ve stumbled across this review and haven’t read the first book you should probably stop reading this blog and go download it (for free!)

Piercing the Darkness continues the story of Samantha Bartlett, a former doctor who got involved with some thoroughly nasty people who trained her to be a cold-blooded killer. Implicated in the assassination of the US President, Samantha finds herself hunted by both the FBI and those who trained/used her. Still reeling from her own morally questionable actions, she hides among the homeless in New York City and puts her medical talents to use helping the needy and destitute. But it’s not long before evildoers are on her tail…

Writing the middle part of a trilogy can be difficult, as the major inciting events tend to be in the first part and the big conclusion in the third. Which can sometimes leave the second being a set-up/filler. At times the book does feel a little like that, with a lot less action and more soul-searching from Samantha. There are few – if any – major revelations we don’t already know from the first book. But despite that, the book is very fast-paced and tight (clocking around 60,000 words) with plenty of thrills along the way. And Samantha is now less of a puppet and more of a shot-caller taking back control of her life.

In addition to Samantha, the book also focuses on her ex-lover Joe Roberts (now an FBI agent) and his investigation into the mysterious past which somehow ties in with the present. The trail takes him to Russia undercover as a university professor, where he doesn’t know who to trust and finds himself in perilous situations at every turn. Joe’s sections are probably the best parts of the book, as he generally gets more involved in the action and suspense than Samantha. At times Piercing reads like a well-executed cold war spy thriller with CIA, KGB and double agents (though set in modern day).

Samantha has another potential love interest / colleague in Chris, a doctor with a shady Government past. In Joe’s absence, he plays a pivotal role as a mentor / friend character to Samantha. And you just know – given the author’s tendency to kill off characters – that some of their friends will end up in the cross-hairs. But I won’t say what happens to them…

The book is much tighter in many ways than Running was. The author has the advantage here that Samantha starts as a trained killer and so she doesn’t have to delve into the backstory or mix in some assassinations to keep up the pace (as happened at the start of the first book). So it feels a smoother package overall.

There were a couple of sections that weren’t quite up to the overall standard. One scene in particular featured the villain in his elaborate underground lair talking to associates around the world. Very Ernst Stavro Blofeld / Spectre (from James Bond) in tone and I almost expected a white cat to jump on his lap! The new President’s sections felt disconnected as they mainly involved new characters not in the first book – though at the end it does become clear why he was included, and the final twist sets up things nicely for the finale.

I’m hoping the third book will feature more action for Samantha, who spent much of this book hiding and not fighting (though plotwise it made perfect sense). With key underlings now eliminated, the third book should feature an exciting conclusion for the kickass heroine.

Fans of the first book should definitely pick up the second. This book is also lighter on the sex than the first, so people who found that off-putting but liked the rest should still carry on with the series.

Piercing The Darkness picks up where author D. A. Bale's first thriller in the series ended. Read Running Into the Darkness before you start "Piercing" so you're up to speed-then hang on! Bale weaves a taut tale of political intrigue, international skullduggery and plain ole revenge worthy of anything heading Amazon's top selling thrillers. The protagonist, Samantha Bartlett, is one smart, sexy woman with a past-and a grudge. Samantha has been used, then betrayed by a powerful organization bent on taking control of the U.S. government. She has few friends, and the friends she DOES have begin dying as her pursuers close in.

This well-researched novel is a fun and exciting read. The characters will stay with you long after you've finished reading.

You have subscribed to alerts for D. A. Bale.

You have been added to D. A. Bale's favorite list.

You can also sign-up to receive email notifications whenever D. A. Bale releases a new book.