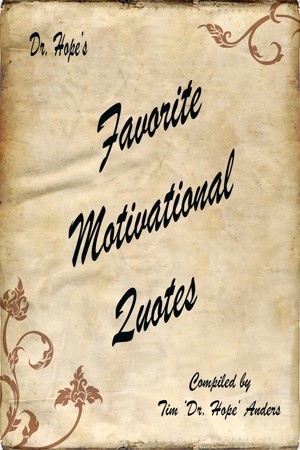 By Tim 'Dr. Hope' Anders
Profound motivational quotations that will inspire you to live a happier and more successful life.

Tim ‘Dr. Hope’ Anders is an award-winning children’s book author who writes under the pseudonym Dr. Hope, J.A.P.D. (Just A Pretend Doctor). Born in New York City, he learned a spirit of optimism and humor from his mother that would stick with him throughout his life. When he was forcibly separated from her at an early age, these lessons empowered him to cope with his ever-changing surroundings.

He credits his mother, the heroine of Everybody Calls My Father, Father, as his inspiration for his many value based children’s books. Dr. Hope vowed that one-day he would give children the same tools that had helped him cope with difficult situations and disagreeable people. And boy, did he. From the promise he made to himself came the award winning "Life Lessons Series," a series of children's books that teach children "life" lessons in entertaining and amusing ways.

Among the titles he has written are Laughing Day, The Frog Who Couldn’t Jump, Chip, the Little Computer, Punctuation Pals, Wonderful Wuzs and Little Miss Contradiction. His children's books are available to read or purchase at: http://laughingday.com His books for grownups are available at http://DrHope.com

Tim ‘Dr. Hope’ Anders is also a talented piano player, composer, lyricist, and producer. He has teamed up with Comic/Actor/Singer Russ T. Nailz and together they have created a series of delightfully humorous children's CDs and cassettes. On the CDs Dr. Hope's stories are brought to life through talented voice actors, special audio effects, heart-felt background music, and delightfully humorous songs that make kids think and laugh. Check them out at: http://laughingday.com/music.htm 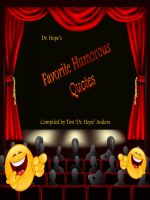