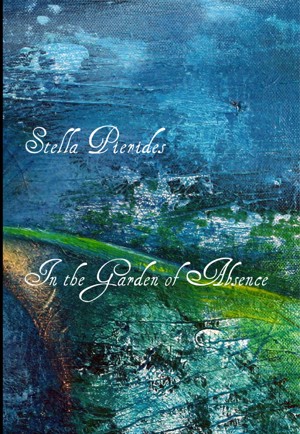 In the Garden of Absence

Michael Dylan Welch, in his afterword to the collection, "Presence in Absence," writes:

"Readers of any book of poetry can assume that each poem has substantial personal meaning for the writer. The poems in this collection go one step further, offering personal meaning to the reader. Stella Pierides pays attention in simple ways (and sometimes vast ways) to her surrounding world, noticing the warmth of a hen's eggs on Mother's Day, that only a dog makes eye contact on a crowded train, or in observing the tiny dark holes in a pin cushion as she extracts its pins."

Stella Pierides grew up in Athens, Greece. She now divides her time between London, UK and Neusaess, DE. She is married and has two adult daughters. She project manages the Per Diem feature for The Haiku Foundation and serves on its board of directors.

Stella's work has been published in numerous print and online journals and anthologies. She has coedited and contributed to Even Paranoids Have Enemies (Routledge, 1998) and Beyond Madness (under Stella Pierides-Muller, JKP, 2002).

From the back cover:
“This is how it's done! Stella Pierides — in a hushed voice — takes me through what it is to be human — and part of the human history from the roots of Western culture in Diogenes&#39; tub to the ‘modern’ human — with all the questions and doubts, the uncertainties that come from that.”

“Of This World’s marvelous, emotionally resonant haibun are steeped in the grace of the garden, rooted in a physical reality so sensuous that you can smell the fragrance of baking bread, of olives and garlic, of lemon and magnolia blossoms — and yet they also spiral on the updraft of metaphor as poet Stella Pierides ‘put[s] our hearts in the shoes of the hummingbird.’”

“A treasure trove of language and image. Pierides walks through dark streets of history, through alleyways of memory - emerging in shiny, unexpected places. Compact, urgent and closely observant, these minute offerings will captivate readers of both poetry and short fiction. An enormously engaging collection.”

— Michelle Elvy, Writer and Editor
.
From the publisher:

“Stella Pierides has cultivated a terse, idiosyncratic style in her haibun that is instantly recognizable, and as a consequence is one of the shining lights of this burgeoning genre. Of This World certainly is, but it also takes us out of the world at large and into private spaces we feel privileged to witness. A unique and satisfying read.“

Stella is a member of English PEN, the Haiku Society of America, and the British Haiku Society. She is also listed in the The Haiku Foundation‘s Haiku Registry.

In the Garden of Absence:
e-edition: https://www.smashwords.com/books/view/263461

“In Pierides’s meditations, imagination takes center stage, as do imaginary gardens, real toads, and their negative space… The result is a welcome debut in which the reader will find much to admire.”
“Briefly Reviewed,” Frogpond, 36-1, Spring 2013 &quot;

You have subscribed to alerts for Stella Pierides.

You have been added to Stella Pierides's favorite list.

You can also sign-up to receive email notifications whenever Stella Pierides releases a new book.