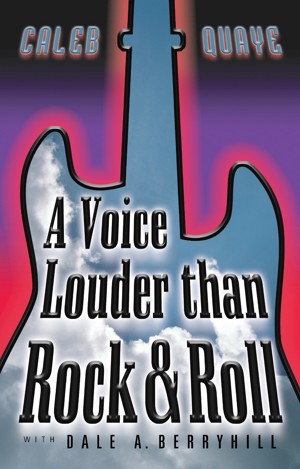 A Voice Louder than Rock & Roll

By Caleb Quaye
Caleb Quaye, perhaps the greatest rock guitarist of the British Invasion, worked with many of the best known rockers of his era, including Paul McCartney, Mick Jagger, Pete Townshend, Lou Reed, Hall & Oates, and Elton John. During that time he thought he had what mattered most in life -- fame, women, money, drugs -- but it wasn't until he encountered Jesus Christ that he realized how wrong he was.

Caleb Quaye was born in London on October 9, 1948.the son and grandson of famous jazz musicians. He began working in the British music industry in 1964 as an errand boy on Denmark Street. There he became friends with another errand boy named Reginald Dwight, who would later experience unparalleled pop music success as "Elton John". Caleb produced and played guitar of Elton's early demos and singles, was instrumental in helping Elton secure his first recording contract, and played on most of his albums through the late '70s. Caleb's band, Hookfoot, released four album through A&M Records.
In the early '80s Caleb established a personal relationship with Jesus Christ and left the music business to enter the ministry. He later formed New World Ministries, Inc. Today he travels the world speaking and playing music that gives glory to God.

You have subscribed to alerts for Caleb Quaye.

You have been added to Caleb Quaye's favorite list.

You can also sign-up to receive email notifications whenever Caleb Quaye releases a new book.