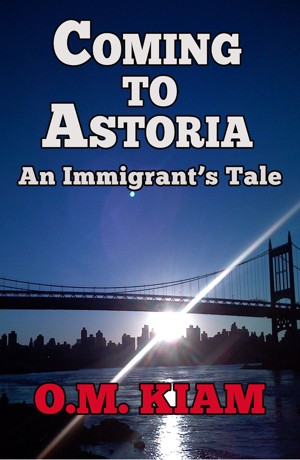 Coming to Astoria: An Immigrant's Tale

By O.M. Kiam
Rated 3.00/5 based on 5 reviews
Why do children growing up together in the same household turn out so completely different? How can a child raised in a family of twelve be so lonely?

Reviews of Coming to Astoria: An Immigrant's Tale by O.M. Kiam

This is the tale of a boy whose family immigrated to Astoria from Jordan, after being displaced from Palestine. The author spoke of many incidents from his youth and told of a difficult family relationship. There were many antics described which left me wondering why they were not punished. For example, he wrote of driving a car on the beach in Daytona, smoking marijuana and being surrounded by police who ended up arresting the fellow who was driving-seems he was a drug dealer, but the police let Mr. Kiam go after he said he was not a friend of the pusher. The police never searched the car and the joint was on the floor by his feet. Really?
The writing style was a bit sophomoric and could have used a but more depth of emotion. Over all, a fair first effort. I received this book as an Early Reviewer. I have not been compensated in any way (other than being given a copy of this book) and my opinion on the book is entirely my own. ( )

Coming to Astoria is an auto-biography by an Arab immigrant whose family was displaced as the result of the creation of the modern borders of Israel in 1948. The author's family and many like them, who had lived peacefully alongside their Jewish neighbors for centuries, chose to leave Palestine and, in this case, move to Jordan due to the violence between the surrounding Arab nations and the new Jewish State.
Please note: I am not an expert on the history of the many wars and the culture of terror and exploitation in the Middle East, so I am not going to properly set the stage for this story. I do not want to be disrespectful to the real human crises in this region by misrepresenting them. However, I encourage *all* readers from around the world to look closely at the past 80 years (well, actually, 3000 or so) in the Middle East. Avoid popular media because each journalist and news outlet has a rooting interest in their writing. Read the history books and the documents from the times, and learn. The "conflict in the Middle East," as we Westerners like to sanitize and call it, is unresolved for very complicated, very violent, very ugly reasons.
Kiam's Coming to Astoria is wonderful because it gives us a first-person account of what happens to the average family caught in the borders and within Arab cultural traditions. We don't often have the chance to listen to the common man's story. We hear what the governments do not censor or what Al Jazeera or CNN chose to report. We listen to stories of celebrities who have overcome humble beginnings and so on. Those stories are all slanted, and not representative of the more average experience. Coming to Astoria is the story of a typical person trying to live within and around these conflicts.
For its universality, Coming to Astoria is worth the read. However, as a work of writing, it is clearly the result of someone not well-practiced in the skill and art of story-telling. The narrative often rambles. Scenes from the author's memory are given great detail, and then years are glossed over, with no connecting tissue between them. There is no unifying theme. Kiam occasionally wanders into the realm of political rant, and spends pages blasting Arab governments and family customs, particularly pertaining to the treatment of women, and then returns to a catalog-like listing of events from his life. Approximately half of the book is spent bitterly detailing the abusiveness of family members, with no resolution other than "eventually I met and married a nice American girl and raised great kids." Overcoming a history of domestic violence is no small accomplishment - I would have liked to hear that story.
In summary, the story would benefit from a ghost writer, or a very strong editor, who can connect Kiam's dots and present a complete tale rather than a set of scenes. One wants to enjoy the book for its unique perspective and first person narrative, but the writing gets in the way. Hopefully, this author will continue to work on his craft, and retell the story again in more polished form.
This review first appeared on irevuo.com

This is a humorous coming to age account of a boy from Palestine, whose family was displaced to Jordan and then emigrated to the USA. Omar Kiam certainly has a very distinctive voice and I enjoyed reading his journey from boyhood. Kiam's narrative reminded me little of Paul Theroux. His honesty and detail made the read compelling.

With the ever-present influence of his parents Omar and his siblings grow up and go their way. Omar's account of shoe shining and his brush with shoplifting was very funny. There is also a theme of melancholy that runs through this book as he doesn't get the approval he wants from his parents and his sisters are expected to marry as his parents wish.

I enjoyed the frankness of this book and it told much about Arab culture from Kiam's perspective as a child growing up in the West for much of his life. I recommends reading this book for the light hearted way the author conveys his struggles and the optimism with which he approaches life.

I am staying the middle ground with this novel, as while it is well written, there was nothing really very different about the novel. It seemed to have the same premise about a young man who came to another country to seek life. Many will enjoy this novel and I do encourage others to read it.

An Arab Son Discovers US Culture

Omar, son of a Palestinian family, was born in Jordan after his family fled there during one of the wars between Palestine and Israel. Omar said there never was any trouble between the Palestinians and Israelis until other Arab nations decided that Israel shouldn’t exist. This story is based on facets of Omar’s life from his few younger years in Jordan until his father obtained a working visa to enter the United States. Two years later he was able to finance his family’s coming over. Most of Omar’s life was mundane and usual to teenage boys who grew up in the New York area. There were interesting moments when he was attempting to adapt to this new life, and for those readers who haven’t grown up in that atmosphere, would probably find it interesting. But then his struggles to earn money as a teenager, adapt to being a U.S. teenager against the culture of his family, was so typical of the teenage children of Displaced Persons brought to the US after WWII. Off and on throughout the story interesting bits and pieces pop up and he concentrated on his mother’s spoiling of her favorite children and cruel treatment of others, including Omar.

Omar spent the last chapter in retrospection about the unfairness of the Arab culture towards their children from arranged marriages, to expecting the children to support them and take care of them. This reviewer did not find anything amiss in his choosing to do this, but perhaps he didn’t realize that many foreign cultures have the same cultural aspect…that their children must help them survive and take care of them in old age.

This story was well written and many readers will enjoy it. I am only giving it three stars because there is nothing so spectacular about the presentation of the adjustment of this young man to American lifestyles, other than he was never afraid to find employment and worked hard to accomplish what he set out to do.

You have subscribed to Smashwords Alerts new release notifications for O.M. Kiam.

You have been added to O.M. Kiam's favorite list.

You can also sign-up to receive email notifications whenever O.M. Kiam releases a new book.