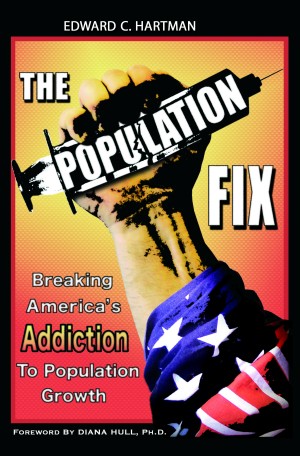 By Edward C. Hartman
America has the highest birth rate and the fastest population growth rate of any developed nation. It also has the largest population of all the nations except for China and India. How many are “too many” and who decides? Isn’t it time for you and your fellow citizens to make those decisions?
Available ebook formats: epub mobi pdf rtf lrf pdb txt html
First 30% Sample: epub mobi (Kindle) lrf more Online Reader
pdb
Price: $4.99 USD
Buy Add to Library Give as a Gift
How gifting works
Create Widget
Tags: immigration population growth social policy
About Edward C. Hartman

A native Californian, Edward C. Hartman has observed the effects of rampant population growth on the nation’s most populous state. A new role as a grandfather in 1996 led him to question the underlying causes of the state’s failing fortunes and declining quality of life for its citizens and for future generations. Since then, he has been gathering data in preparation for writing the Population Fix.

Edward C. Hartman spent 28 years in the telecommunications industry and runs his own Financial services business. He lives
with his wife in the San Francisco Bay Area. He has two children and four grandchildren.

Reviews of The Population Fix by Edward C. Hartman

You have subscribed to alerts for Edward C. Hartman.

You have been added to Edward C. Hartman's favorite list.

You can also sign-up to receive email notifications whenever Edward C. Hartman releases a new book.