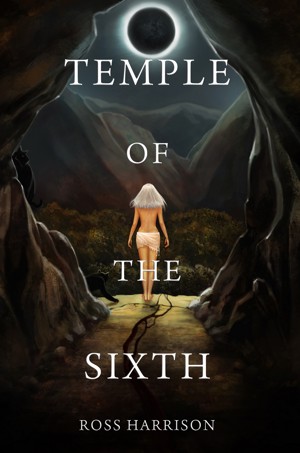 Temple of the Sixth

By Ross Harrison
Rated 5.00/5 based on 1 review
A race to rescue a kidnapped god and stop a fifty thousand year old evil dominating the galaxy... Too much for a failed private detective? More
- The second standalone novel in the NEXUS universe -

When omens of the End Times appear across the galaxy, it signals the start of a war between two immortal forces - the Celestians and the Hierarchy. The Hierarchy have learnt and adapted since they last waged war, forcing the Celestians to enlist the aid of mortals to free a kidnapped god.

Thardriik Jhunassi Kortlyn III - Theak - was a private detective. For a day. Then came the incident with the dead puppy and the inevitable end of his crime-fighting career. Despite his flaws, Theak is a clear choice for the Celestians, and he is drawn into the centre of a battle that will decide the fate of the galaxy.

Time is something the Celestians’ heroes do not have as the Hierarchy’s infection spreads across countless worlds, bending every living creature to their will. With the heroes’ every step bringing them closer towards one final battle, there is only one question: can they defeat an ancient and immortal enemy?
Available ebook formats: epub mobi pdf lrf pdb txt html
First 20% Sample: epub mobi (Kindle) lrf more Online Reader
pdb
Price: $3.45 USD
Buy Add to Library Give as a Gift
How gifting works
Create Widget
Tags: space opera gods war immortals four horsemen science fantasy
About Ross Harrison

About the Series: NEXUS

NEXUS is a non-linear science-fantasy/space opera series in which every book has some kind of connection to the others. Although best read in order for more background and understanding, only Ghosts of the Fallen is a direct sequel.

Reviews of Temple of the Sixth by Ross Harrison

Thardriik Jhunassi Kortlyn III, better known as Theak, is an ex-military pilot seeking his fortune as a private investigator, so when he receives an anonymous note basically saying, “meet me at this space station, and you’ll make vast amounts of money,” he immediately jumps onto ship and zooms over. What he finds when he reaches the station is a massacre. The next thing he knows, he’s pulled into an ancient conflict between godlike beings, forced to fight for the side of good when all he really wants is to get paid—and live to tell the tale. Meanwhile, in another part of the galaxy, Omar and Palitz, two City Guard secretaries, find their planet overrun by undead former citizens, surrounded by omens of the apocalypse.

Temple of the Sixth takes its conflict to a grand, end-of-the-universe scale. The stakes could not be higher. If this mysterious, ancient evil is not stopped, everything will cease to be. But why are these godlike beings so bent on destruction? What can a mere batch of mortals—not all of them heroes—do to stop them? Therein lies the epic conflict that keeps the pages turning.

Although it’s classified as “science fiction” due to the nature of its universe—spaceships, aliens, robots, laser guns, and the like—Temple of the Sixth reads more like fantasy, reminiscent of some of the more world-ending story lines featured in comic books such as X-Men. Psychic powers, out-of-dimension locations, higher levels of existence, possession—all is fair game. Bit by bit, Harrison reveals the mythology behind his universe.

There’s something satisfying about opening a sequel and hearing familiar voices, reentering a familiar space. Harrison’s dry sense of humor illuminates the text with his unique style of storytelling. He once again shows off his strengths as a writer of thrilling action scenes and creator of immersive worlds. In Temple of the Sixth, he expands upon the concepts he set up in the first book and illustrates his universe from a different angle. It’s is really more of a spin-off to Shadow of the Wraith than a sequel. Travis Archer, the main character from the first book, doesn’t show up until more than halfway through the book and plays a supporting role to his buddy Theak. Other characters, such as Juni, have only brief cameos (for those of you who are wondering—yes, Arkuun-Marl makes an appearance). As such, it can be read as a stand-alone novel even if one hasn’t had a chance to read the first book yet.

In Temple of the Sixth, Harrison tells his story from multiple angles in a rather cinematic fashion. While Theak is the thread that ties the novel together, he doesn’t drive the action—he reacts to it. Flashes to Omar and Palitz’s struggles, to the small man trying to recruit agents for the side of good, and to the perspective of the godlike Sixth herself give the reader a panoramic view of the universe and its conflict. But despite all the noise surrounding him, Theak nevertheless shines through as a memorable and likable character. Confident, cavalier, and a tad ridiculous at times, he’s not exactly the noble hero type and doesn’t even take himself too seriously. Nevertheless, he does what’s right, even if he’s somewhat annoyed that he has to.

For those who read and enjoyed Shadow of the Wraith, Temple of the Sixth, while very different, is a welcome return to Harrison’s world of starships and ancient conflicts, robots and fantastical powers. Harrison’s writing is tighter and more understated than in his debut novel, and yet it retains its snarky sparkle. For those who haven’t—and why haven’t you?—the book stands on its own as a fascinating take on the age-old battle between Good and Evil. Clever, thrilling, and entertaining on all levels, Temple of the Sixth is a page-turning journey through a universe in chaos.