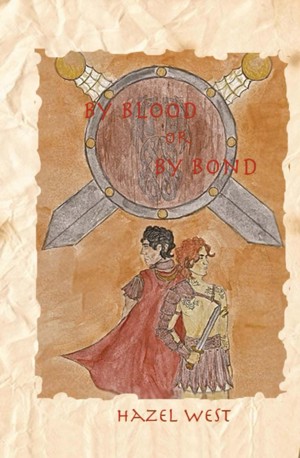 By Blood or By Bond

By Hazel B. West
Rated 3.00/5 based on 1 reviews
Caolan, the son of a Celtic chieftain and Viggo, a centurion from the Roman army are thrown together in poor circumstances by the deaths of Caolan's father and Viggo's son. Can they look past their differences and hatred of each other to find what they have lost: a father and a son? More
Which ties are stronger—those of Blood or those of Bond.

Caolán, the son of a Celtic chieftain, awaits his first pitched battle against the Roman invaders, knowing that this is the moment in which he will truly become a warrior, of the tribe.

Viggo Callias is a seasoned centurion in the Roman army on his first deployment to Britain with his newly enlisted son, Aulus. Serving under an incompetent commander, he wonders whether victory will be theirs.

But fate takes a hand in both Caolán and Viggo’s lives when Viggo’s son is killed by a spear meant for him. Enraged at the loss of his son, Viggo seeks vengeance on the man responsible: Caolán’s father. As the chieftain breathes his last, Viggo vows to take Caolán as a slave to avenge Aulus’ untimely death.

Torn from his country and people, Caolán’s only comfort is the hope that one day he will be able to avenge his father. But can the greatest wrongs be righted? Brotherly bonds, gladiators, old enemies, corrupt politicians and a young woman who captures Caolán’s heart, take a role in the physical and emotional journey that binds Caolán’s and Viggo’s fates together. Can the two wounded parties work past their hatred of each other and find what they have lost: a father and a son?

I spend a good bit of my time writing historical fiction about brave men and women who have graced the pages of history, trying to bring more light to their legacies so readers of all ages will enjoy them.

My favorite kinds of books: Good adventure (sometimes with a little romance), Epic historical series, anything having to do with brotherhood or camaraderie--I'll read anything if it has a strong brotherly bond between two or more guys, time travel novels as long as they are traveling back in time (and not in their own lifetime), good steampunk novels (heavy on the clankers and none of the weird things), military adventure, historical fiction that's either well-written or has unique twists, meaningful or bittersweet war novels, occasionally a good funny book especially ones that are spoofs off old stories or fairy tales, and classics--always the classics!

Learn more about Hazel B. West

A copy of By Blood or By Bond was kindly sent to me by Hazel B. West in exchange for an honest review.

When I first started reading this book I was very impressed by it, and I remain impressed by the characters and how much I felt for them throughout the novel – they were the reason I wasn’t completely ripping my hair out over the inaccuracies of what is supposed to be a researched novel.

It is essentially the story of a young Celt, Caolán, who sees his father murdered by a Roman centurion, Viggo, and is then taken to Rome as a slave, but ends up in a ludus to train as a gladiator. Along the way Caolán and Viggo have to come to terms with losing their father and son, respectively. Whilst this makes the basis of the plot it in no way describes it in its entirety. There is much emphasis on the importance of brotherhood, whether that is through blood or bond, throughout the novel and I really enjoyed reading about the relationships between Caolán and Fáelan (I would have loved them to be lovers and not just friends though), and Viggo and Hector (even if their relationships seems to become less important at certain points in the novel). Amatus and Lucius are perfectly despicable villains and create a nice contrast to Viggo and Caolán. There was a touch of romance (when is there not?) but it was well done and didn’t overwhelm the rest of the novel.

Maybe I’m the one in the wrong but I’m pretty sure it’s doctore not doctor and lanista not lanistra, maybe both can be used but it still frustrated me beyond belief when I read it. I’m also fairly certain the name Viggo would not have been used in Roman times, amongst Roman men, as it has origins in Scandinavian and Dutch; it’s one of my favourite names but it never felt right in the context of a novel set in Ancient Rome. There are also frequent grammatical errors and some of the sentences are structured bizarrely, almost as if West has tried to use too many words to describe something.

Aside from the errors, and despite the predictability of the ending, By Blood or By Bond is extremely readable and intriguing, with characters that really get under your skin. I think with another round of editing this could be a very good novel, as it has an awful lot of potential and West does portray relationships beautifully.

You have subscribed to alerts for Hazel B. West.

You have been added to Hazel B. West's favorite list.

You can also sign-up to receive email notifications whenever Hazel B. West releases a new book.