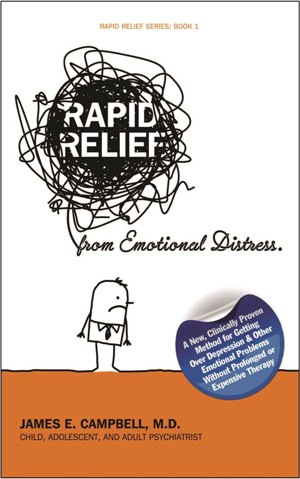 By James E. Campbell, M.D.
A new, clinically proven method for getting over depression and other emotional problems without prolonged or expensive therapy.

This is Book One in the author's four-book Rapid Relief Series. It breaks important new ground in mental health care. Dr. Campbell offers many techniques that can be effectively used as "self-help" methods to achieve Rapid Relief from Emotional Distewaa. More
A new, clinically proven method for getting over depression and other emotional problems without prolonged or expensive therapy.

The ideas in this book will help you
- Understand how “change strategies” are actually detrimental to you.
- Define words in ways that help to understand and resolve problems.
- Become more effective in letting go of psychological pain.
- See how your thinking creates your psychological pain.
- Identify the roll language has in complicating your life.
- Take action through the ACT formula.
- Help you apply the Choice System of thinking.
- Get rid of the anger experience.
- Create better self-esteem.
- Put response-ability into practice.
- Learn techniques to get relief in nearly any situation.
- To feel better.

This is Book One in Dr. Campbell's four-book Rapid Relief Series.

James E. Campbell, M. D. was born in farm country in Middle Western Illinois. He graduated co-valedictorian from Warsaw High School. He then went to MacMurray College in Jacksonville , IL. for three years before being accepted to University of Iowa, University of IL. and St. Louis University Medical schools. He chose to go to St. Louis University, and then to Michael Reese in Chicago for his basic three year adult psychiatric residency training.

In 1971, after two years in the Air Force, he set up private practice in Phoenix, Arizona. Because of the rapid turnover of patients in his office, an outcome of the use of rapid relief principles, he decided to extend the nature of his practice by taking a two-year child fellowship at UCLA. It was here that he met Dr. Gary Emery who he later collaborated with to write the original Rapid Relief from Emotional Distress.

Web site: http://www.rapidreliefseries.com
Call 602-439-2400 to find out if Dr. Campbell is available for an appointment; also, to order print editions of his books.

You have subscribed to alerts for James E. Campbell, M.D..

Would you like to favorite James E. Campbell, M.D.?

You have been added to James E. Campbell, M.D.'s favorite list.