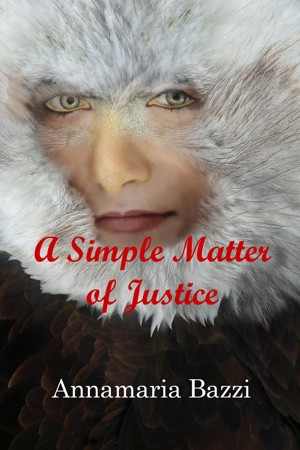 A Simple Matter of Justice

Rated 4.67/5 based on 3 reviews
Abducted, raped and killed, Samantha is given a chance to bring her killer to justice. In accepting the challenge from a talking wolf, she never imagined she would become a spirit hawk by night. In the turmoil of her new existence, would she find the courage to bring the killer to the forest where she knows he will receive justice?
Available ebook formats: epub mobi pdf rtf lrf pdb txt html
First 20% Sample: epub mobi (Kindle) lrf more Online Reader
pdb
Price: $1.99 USD
Buy Add to Library Give as a Gift
How gifting works
Create Widget
Tags: crime suspense paranormal vengeance spirit hawk
About Annamaria Bazzi

Although born in the United States, Annamaria Bazzi spent a great deal of her childhood in Sicily, Italy, in a town called Sciacca. Italian was the language spoken at home. Therefore, she had no problems when she found herself growing up in a strange country.
Upon returning to the states, she swore she would speak without an accent.
She attended Wayne State University in Detroit Michigan, where she obtained her Bachelor of Science in Computers with a minor in Spanish.
Annamaria spent twenty years programming systems for large corporations, creating innovative solution, and addressing customer problems. During those years, she raised four daughters and one husband. Annamaria lives in Richmond Virginia with her small family where she now dedicates a good part of her day writing.

Reviews of A Simple Matter of Justice by Annamaria Bazzi

Samantha considered asking a security guard to walk her to her car, but she thought she would be safe enough. It's a decision she will regret for the rest of her life. Dragged into the forest, raped and murdered, Samantha's fears that she will not be the only victim. So when she if offered a change to take back her life in order to bring her killer to justice, she puts aside her fear of facing again in order to protect others.

A Simple Matter of Justice is Annamaria Bazzi's first published short story. The spiritual and paranormal elements create an interesting mixture of real world crime and supernatural revenge. Samantha experiences both, and at first struggles to understand both aspects. Her rape and murder provide an emotional surge that she continues to battle with throughout the story. Her experience was a bit graphic, which makes it inappropriate for younger readers.

Tempering her fear and anger is the support of the spirit animals that offer her a second chance. One of those, Steven, is sent to help her on this journey. Steven provides the companionship Samantha needs, even though he also inspires a certain amount of fear in Samantha as she tries to cope with the violence she just experienced. Their relationship is a buffer against the more harsh elements of Samantha's experience. While their is little romantic element to their relationship, their is friendship. Anything more would not have set well for me.

My only complaint is that certain aspects of this story were underdeveloped. Some areas were rushed through to keep the length in check. Emotional responses occasionally lacked the depth they could have reached because of the fast pace. Overall, this was a good introduction to Bazzi's work. I am interested to read more of her work and see how she handles a full length novel.

In the first few pages, Annamaria Bazzi paints a vivid picture of a horrible attack on a young woman named Samantha, the lead female character, but as the story continues to unfold it leads the reader on a mesmerizing journey into the world of Spirit Animals who have their own very unique take on justice.

I haven’t read many short stories, so I really wasn’t sure what to expect. Would there be enough time to develop the characters? Would there be a substantial amount of depth and build up as the story came to a head? And, would I feel like the conflict was sufficiently resolved at the end? Yes! Yes, and Yes again! Annamaria Bazzi did a superb job at reeling me, making me fall for her characters and then delivering an ending that did not disappoint!

A compelling initial scene, well developed characters and a relevant and realistic story with fantasy and paranormal elements makes this short story a great read.

Samantha, the main character is a strong, compassionate woman struggling with her emotions after a horrific crime is committed against her. The resolution of the story leaves the reader satisfied.

Well written. I will certainly look for and read any other works by Ms. Bazzi.

You have subscribed to alerts for Annamaria Bazzi.

You have been added to Annamaria Bazzi's favorite list.

You can also sign-up to receive email notifications whenever Annamaria Bazzi releases a new book.