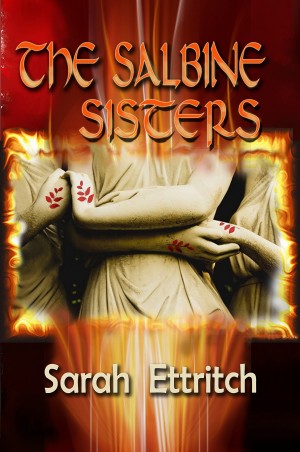 By Sarah Ettritch
Rated 5.00/5 based on 3 reviews
She gave up everything to become a Salbine Sister, member of a religious order of powerful female mages. But when Maddy nearly dies while trying to draw forth elemental fire, she learns that Salbine has withdrawn from her the gifts every sister works to master. On her journey to another monastery to research her condition, Maddy's faith in both herself and Salbine are tested to their limits.
Available ebook formats: epub mobi pdf lrf pdb html
First 20% Sample: epub mobi (Kindle) lrf more Online Reader
pdb
Price: $5.99 USD
Buy Add to Library Give as a Gift
How gifting works
Create Widget
Tags: romance fantasy magic faith lesbian
About Sarah Ettritch

About the Series: Salbine Sisters

I really enjoyed the plot which focuses both a little more on story-telling than romance; it could've used a little more 'romantic' interaction between Maddy and Lillian, but all in all, it was still great. The characters appeared a little flat in the beginning, but they grew on me with each passing page.

(reviewed the day of purchase)
Jodie Atkinson reviewed on March 27, 2011

What a wonderful book. I enjoyed it so much, that as soon as I finished reading it, I immediately started to read it again. Sarah has built a new and interesting world where young girls can find themselves called to serve as Sisters of Salbine. When they enter the order, they learn how to draw on and use the elements. The book follows Maddy, who has left her family and all she knew to become a Sister of Salbine, who is sure in the knowledge that she's where she's meant to be. Her relationship with the outwardly irascible, yet inwardly shy Lillian, an older Mistress of the order, is bringing her joy. Especially when, after a few stumbles, they work out that they both want more from the other than just a bed partner. All this changes however, when she suffers a crisis of faith after she discovers she can't draw on the elements, which sets her apart from all other Sisters. This prompts her to travel to another monastery to research her condition and hopefully gain an understanding of her place in the world. Little does she know how life changing the journey will be.

Maddy and Lillian are wonderfully written, their budding romance is wonderful, as is the way Maddy can see right past Lillian's gruff exterior. Sarah has given us a wonderful cast of supporting characters and a story that engrosses you from the start. I really like the way Sarah writes, she doesn't bombard you with huge passages of facts and data in setting up this new world, but masterfully weaves snippets of important history and information throughout the story. The Salbine Sisters has everything you would want, at heart a romance but liberally laced with adventure, humour and character growth that has you cheering them on. It's a complete story with no threads left hanging, yet there are some intriguing elements of the story that call out for another book, I'd love to read more in the story of Maddy and Lillian and the Salbine Sisters.

A novel by Sarah Ettritch, "The Salbine Sisters" looks at a world where powerful women are revered for their magical ability to draw upon the four elements. What happens when one of the chosen turns out to not have the same abilities? Is there truly a place in the order for those who cannot perform as expected? Part sweet love story, part personal journey, this tale is masterfully woven together with fluid prose and a well-paced storyline. The author entwines key details of the world perfectly into the story, and I was never left confused or unsure about what was going on. Being able to draw my own conclusions from the dialogue and events really allowed me to become completely engaged. And this story was engaging from the very beginning; it never really seemed to lag and I was riveted throughout.

The ending offers the reader closure, tying up the threads nicely while still leaving room to think about the future. The story doesn't progress the way you might expect, which lends its own element of delight and satisfaction. The message I see in the story is applicable to all of us in that we may not always realize that the answers given us are not necessarily the answers we expect. Maddy and Lillian possess both strong and fragile characteristics, but their strengths and weaknesses compliment one other. I loved the interchanges between the two of them, and those scenes allowed us to learn a lot about their characters without ever being told explicitly by the author. Their relationship was sweet, but it was not without its own bumps in the road, and those bumps gave the chance for the characters to show growth. Each woman discovers what she needs to become whole, and for each of them, it's not what she had expected. The supporting characters were perfectly placed in a way that added much to the overall story.

A very enjoyable and heartwarming story that utterly engages from start to finish! Strongly recommended.

(reviewed 4 months after purchase)
Lara Zielinsky reviewed on March 9, 2011
(no rating)
The Salbine Sisters is a religious order and Sister Maddy is among the novitiates who must learn to draw the elements in order to advance to "adept" and then a full fledged Mistress of Salbine. She was assigned to learn the skill from Mistress Lillian and in the course of things the two began an affair which they are unsuccessful in keeping secret.

Unfortunately it turns out that Maddy has a problem with drawing on the elements. The story really begins as she tries to learn what her place is in the Order if she is unable to accomplish this skill most commonly associated with a true Sister of the Order.

Maddy's journey to find herself touches many others as well. It's a good story, though it could have used a tighter editor. There were several passages that were telling rather than showing, and many more words used than necessary to convey the story.

I liked Maddy and her mistress, Lillian, grew on me. Many of the other characters were less defined, but served their purposes in the story.

In any case, this is a good fantasy read, with a well-developed and consistent world, and though a bit expected in its twists at times, a solid story arc.