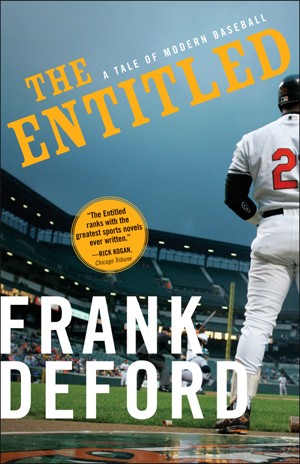 By Frank Deford
From six-time National Sportswriter of the Year and NPR commentator Frank Deford comes a richly detailed, page-turning tale that takes you deep into America’s game. From the dugouts to the tabloid scandals, from the lights of the field to the glare of the media, The Entitled is the great novel of baseball’s modern era.

Frank Deford is a six-time National Sportswriter of the Year, Senior Contributing Editor at Sports Illustrated, commentator on NPR’s Morning Edition and a correspondent on the HBO show RealSports with Bryant Gumbel. In addition to being the author of more than a dozen books, he has been elected to the Hall of Fame of the National Association of Sportscasters and Sportswriters and has been awarded both an Emmy and a Peabody. Two of his books, Everybody’s All-American and Alex: The Life of a Child, a memoir about his daughter who died of cystic fibrosis, have been made into movies. Sporting News describes Deford as “the most influential sports voice among members of the print media” and GQ simply calls him “the world’s greatest sportswriter.” Deford resides in Connecticut with his wife, Carol.

You have subscribed to alerts for Frank Deford.

You have been added to Frank Deford's favorite list.

You can also sign-up to receive email notifications whenever Frank Deford releases a new book.