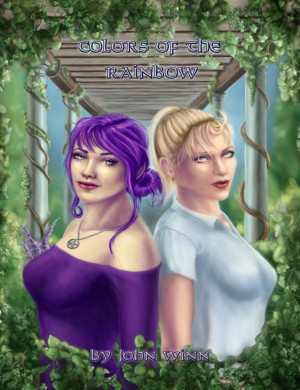 Colors of the Rainbow

Cate is a down home Southerner with unconventional ideas. Penelope is anything but. When several Acts of God(Goddess?) forces them to cross paths, the outcome is bloody. Determined for revenge, Penelope chases her foe cross country with one goal: making their next encounter the last. But Cate has a secret. Can she keep it together long enough to survive, or will she wither? Only Brigid knows.

Conceived in an underground research center by a pair of mad scientists, from an early age the human-spaghetti hybrid known as John Winn has been sitting in his basement, wiling away hours pounding away scribbling tales of the fantastic, scary and just plain weird with his noodly appendage. After a brief and unsuccessful stint disguised among the humans as an ink-stained wretch, Winn gradually realized that his stories might be enjoyed by more than just himself.

Since then, he has embarked on a exhausting quest in the hopes of making his material available via print and on the Web.

He lives in an undisclosed location outside Greensboro.

You have subscribed to alerts for John Winn.

You have been added to John Winn's favorite list.

You can also sign-up to receive email notifications whenever John Winn releases a new book.