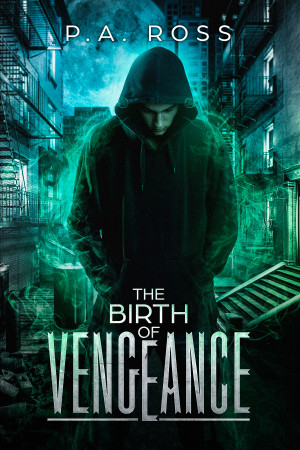 By P.A. Ross
Rated 4.00/5 based on 1 reviews
For Jon Harper, adolescence has been a revolving door of bullying, torment, and isolation. Sick of constantly looking over his shoulder, Jon vows vengeance on those who have wronged him.

Enter Thorn: a dark angel of destiny or Jon’s undoing? More
For Jon Harper, adolescence has been a revolving door of bullying, torment, and isolation. Sick of constantly looking over his shoulder, Jon vows vengeance on those who have wronged him.

Enter Thorn: a dark angel of destiny or Jon’s undoing? It is only with the help of this sultry new companion does Jon obtain the ability to wreak vengeance through the power of the vampire formula, a genetic altering drug.

With the vampire formula, the user has the ability to temporarily transform into a vampire, complete with the awesome powers afforded to the dark immortals. Jon must only choose his path: redemption or forgiveness? For a young man in the throes of young love and awakened passions, revenge is a dish best served in the dead of night.

In this all-new dark fantasy series, Vampire Formula from P.A. Ross, imagine the world of vampires and forbidden love turned upside down. Will darkness and passion get the better of Jon Harper? Will the power of the night change him forever? Find out in this first installment in the series, The Birth of Vengeance.

P.A. Ross lives in the England with his two daughters and wife. When not day dreaming of fantastical adventures and crazy characters, he enjoys time with his family, enjoying sports and films.

With a Degree in Astrophysics he has learnt to accept and understand the worlds of unseen forces in world such as quantum mechanics and chaos theory, which has helped immensely with writing fantasy novels of other unseen forces in the real world.

P.A. Ross is published in urban fantasy – vampires and demons in the modern world and science fiction genres of superheroes and spaceships. In one book he brings these worlds colliding together.

To learn more about P.A. Ross and his books go to www.thornsneedles.com

When I began reading The Birth of Vengeance, I quietly wondered what the story was about. To begin with, you meet Jonathon Harper, a rather unremarkable young man, nearing the end of his school career, and looking forward to beginning college. His is a life which takes a turn for the worse when he’s becomes the target of a local gang of bullies and thugs, causing him to lose his one and only friend, and making him and his father flee his hometown for his safety.

It isn’t until several chapters on that he meets Thorn, a beautiful and dangerous woman, held captive and forced to be the subject of government experiments, and oh yeah, she’s a vampire. Once he is able to free Throne, the real story begins. Vengeance, then, is another entry into the burgeoning, and I would say over-crowded genre of Vampire literature.

So what makes Vengeance unique? We’ve seen vampires as heroes and we’ve seen vampires as villains. Thorn, at least in this novel, is neither. She’s content to be, to exist and co-exist, to feed and let live, only killing when she senses her victims mean to do her, and others harm. Not quite virtuous, but not entirely evil in a classical sense. Which is not to say she has a strong moral code.

She begins to mentor the weak and pathetic Jon, teaching him, molding him to become a man, to fight and to stand up for himself. Aided with a serum developed by Thorns captors, which when injected, gives the injectees vampire-like strength and aggression, Jon learns to fight, and begins a campaign to seek revenge on those who tormented him. In the end, this becomes a test. Jon has to prove his devotion to Thorn, and his worthiness of becoming a vampire.

The Birth of Vengeance is an easy read. Nothing remarkable about it, which is not to say it’s not worth checking out. It may not have the broad commercial appeal of a Twilight Saga, or the upcoming Vampire Academy, which in my book makes it even more appealing. This is not some lame, tween vampire romance novel.

What it is, however, is a coming-of-age story, where the protagonist must learn to face his fears, to grow up and take charge of his own destiny. He is forced to make life-altering decisions and accept the consequences of said decisions, and I’ll admit that I felt a grim sense of satisfaction whenever he meets his former tormentors.

Vengeance is a good, solid story, that should appeal to those who would like to enjoy a casual read. It’s entertaining, with some dark moments which are resolved in a satisfying manner. I wholly recommend you read it.

(reviewed 5 months after purchase)
Catherine Hammill reviewed on Dec. 1, 2013
(no rating)
This is your typical revenge story but with a blood sucking twist. Paul Andrew Ross goes to great lengths to show how the vampire world can run alongside the normalcy of human life. This is not your average Hamlet-wants-to-avenge-the-death-of-his-father-by-killing-his-uncle scenario but is something of a more feral nature and when the act of revenge is imminent, there is no hesitation.

You immediately get the sense of what country this is set and it puts us in our place. Ross “shows” rather than “tells” us this and gives us the freedom and the time to work it out for ourselves.
Jonathan is yet another example of a boy that doesn't want to be too involved with reality. In some ways his limiting himself to just one friend makes him an easy target to be manipulated into what he becomes much later on in the book. These critical clues to his characteristics make way for something supernatural occurrences.

There is a lot of general hatred towards people which can sometimes be a little overwhelming. However the powerful underlying notion is that Jonathan hates himself more than the bullies for his inactions. He is haunted by the fact that he is a coward and that he can’t change the past. There is a foreboding that this self-hatred cannot stay contained for very long and will at some point resurface with devastating effects.

I like the schizophrenic tendencies running throughout the latter stages of the book. Day Jonathan and night Jonathan battle it out over one body and clash in many ways. In some ways this is very similar to Confessions of a justified sinner by James Hogg, a classic that must be read. Taking the main character from Hogg's book, he talks to us almost in the form of a diary entry and we hear of the torment he faces from a being he thinks is the devil. However it soon comes to fruition that it is his own mind he is battling with. He persuades himself to do terrible crimes. Jonathan's conflicting inner self is similar to this however; his decisions are more influenced by thorn.

It seems inevitable but when you get vampires in a novel there is almost always a sex scene or two. In this instance this book can hardly be compared to Fifty Shades but the content could have been more specific without being cringingly embarrassing to read. However, I have to praise Ross or any author for that matter to include anything along this subject matter as it has to be written in such a way that it doesn’t come across as farfetched or silly.

Overall brilliantly written however I would like to see the beautiful side of the vampire rather than seeing their dangerous capabilities. Assuming there will be a next instalment, I would like see where this thirst of revenge will lead to.