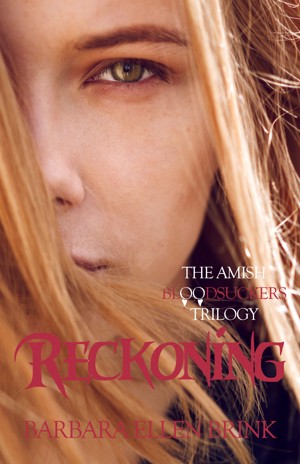 By Barbara Ellen Brink
Rated 5.00/5 based on 1 review
Reckoning (book 3) Amish Bloodsucker Trilogy
Jael Shetler is the Chosen. Raised in the desert of Nevada and destined to save the Minnesota Loon Lake Amish Community from the evil leadership of the Bishop, a powerful vampire.
In Reckoning, Jael must find a way to destroy the Bishop before he finds a way to destroy her. With new friends and old, she has plenty of help, but time is running out. More
The Bishop is growing his vampire followers by leaps and bounds, feeding on the naturally rebellious teenage population. Jael tries to keep one step ahead of the undead and their schemes while maintaining a semi-normal life. But living Amish while still being considered an outsider is beginning to wear on her.
With old friends in town for the summer and a boyfriend as loyal as Captain America, Jael is never short of help. Slaying vamps and having people around that you love can be a dangerous combination. Jael has some hard decisions to make and she’s afraid not everyone will be on board.
Will she fulfill her destiny or fall into the Bishop’s trap?
Available ebook formats: epub mobi pdf rtf lrf pdb txt html
First 15% Sample: epub mobi (Kindle) lrf more Online Reader
pdb
Price: $3.99 USD
Buy Add to Library Give as a Gift
How gifting works
Create Widget
Tags: young adult adventure vampire slayer vampire horror minnesota author chosen one teen heroine horror action adventure amish bloodsuckers amish vampires barbara ellen brink
About Barbara Ellen Brink

I’ve gotten attached to the people and setting of this series, so finishing this last book in the trilogy about Jael, the teenage Amish vampire slayer, was almost as sad as it was satisfying. Ever since her parents’ murders, ordered by the vampire known as the Bishop, Jael has been living with her Amish grandparents in Minnesota, learning their plain and simple ways while awaiting the chance to root out the vampires hidden in their midst and avenge her parents’ deaths. Gabe, Jael’s artistically gifted boyfriend, has started to develop some martial arts abilities of his own, which is a good thing because the Bishop and his vampire underlings have some new tricks up their undead sleeves.

Though Jael’s slayer skills are already strong, she still has lessons to learn. Jael’s determination and overconfidence are putting her loved ones at risk, and when someone she knows begins to transform into a vampire in spite of struggling to resist the change, Jael realizes there are some gray areas in the battle between good and evil.

It’s great to have Jael’s Nevada friends Bree and Shadow back in the story for the grand finale, along with Jael’s globe trotting Uncle Seth. Author Barbara Ellen Brink has balanced Jael’s very serious dedication to her mission with a dash of irreverent teenage humor, which makes it all the harder to have to leave her behind now that her story is over.

You have subscribed to Smashwords Alerts new release notifications for Barbara Ellen Brink.