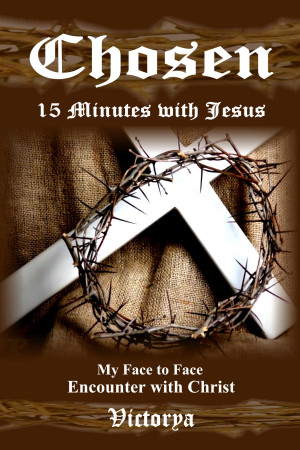 By Victorya
An inspiring true story, of heartbreak, love, grace,and redemption that will lift the heart.
A story of a face to face encounter with Christ. Meet Jesus for the first time, or allow your faith to grow even more through the truth of Gods limit-less everlasting power. More
"My eyes beheld the Son of God, and King of Kings in all His glory, it was a divine blessing as I looked upon the most Blessed, as I came face to face with the truth, and the truth is, Jesus is Alive. I was Chosen, and spent 15 minutes with Jesus through a prayer and received a miraculous encounter with Christ, in January 1998. The message, 'forgiveness".

A true testament of Victorya's eyewitness event of the manifestation and visitation from Jesus which took place in January 1998.

An inspiring true story, of heartbreak, love, grace, mercy, repentance, and redemption. A read for all ages, that will lift the heart. Meet Jesus for the first time, or allow your faith to grow even more through the truth of Gods limit-less everlasting power and authority.

Victorya is the founder of Messages of Faith Ministry, and its training division of Chaplaincy Nevada. In 1998 Victorya received a divine visitation from Jesus Christ, His message was on forgiveness, and His revelation to her was about God. On July 14th 2017 her testimony was seen on the international CBN Christian Broadcasting Network, the 700 Club.
In 2015 Victorya was awarded Lifetime Achievement Recognition for her work from the NV State Governors Office, US Senatorial, US House of Representatives, US House of Congress, and partnered organizations. Victorya has trained over 250 "boots on the ground" Chaplains for Christ and community. She is a Nevada State licensed Minister, a City and County Prayer Invocator, SR Chaplain, and a Christian published author of ~Chosen 15 Minutes with Jesus~.
She retired in 2007 from her sport of Tae Kwon Do martial arts as a 4th degree black belt

You have subscribed to alerts for Victorya.

You can also sign-up to receive email notifications whenever Victorya releases a new book.