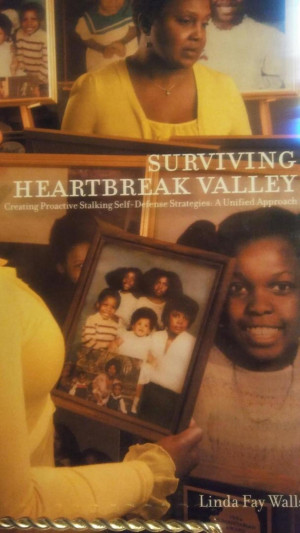 In 1989 Linda Walls had put an abusive relationship behind her, graduated college, and was ready to start the next chapter in life. But in one hellish night everything changed. She came home to find her house on fire with her four young children trapped inside. The children’s father, Bernon Howery, a violent man who stalked Linda following their break-up, had ignited the blaze.

In 1991 he was sentenced to death for murdering his children. Linda meanwhile began the difficult process of putting her life back together. Rather than simply drowning in a sea of despair, she began speaking out against stalking and domestic violence to help prevent what happened to her from befalling others. She became an outspoken advocate, conducting seminars, speaking to organizations and groups, appearing on the Oprah Winfrey Show and in a Diane Sawyer documentary.

But Linda’s battle for justice and to establish a new life for herself was far from over. Bernon Howery continued to wreak havoc in her life, fighting to have his death sentence overturned which was eventually commuted to four life sentences.

Writing Surviving Heartbreak Valley is “my next chapter,” Linda said. "I want the telling of my story to add a real sense of urgency in building greater awareness of the domestic horror taking place in America, and our nation’s need to galvanize a crusade to prevent it.”

Linda Fay Walls is a first-time author and advocate against domestic violence. A decade on from that tragic night in 1989, she gave birth to her now-teenage daughter and the family lives happily in Illinois.

Linda Walls is a survivor. She was stalked, and her four young children were murdered in 1989. Since then, she has fought to bring stiffer laws to fruition in Illinois State and the nation to address stalking, and victims' needs and rights. With a master’s degree in communications, Linda has developed "Stalking Self-Defense: a workshop which was reviewed favorably by the National Victims Center in Washington, D.C. Linda is a public/professional speaker/trainer/ and author. Linda has taught on the college level.

In May 2002 Linda established Walls CILA Services Unlimited, Inc., a social service agency that was licensed to provide community integrated living arrangements (group home) for people who have developmental disabilities. For the past ten years she enjoyed her work as the Executive Director, utilizing a very- hands on approach in the delivery of services.

Linda lives in Illinois with her family. In April of 1999 they were blessed with a beautiful baby girl. Her daughter is now thirteen years old, and Linda states, “I have truly enjoyed the blessing of loving her. And I pray that she will be blessed to live a long beautiful life."

Recipient of the 1995 State Representative 85th District of the State of Illinois' House Certificate: Outstanding Volunteer of Kankakee County in the Health & Human Services Category.

Diane Sawyer's national documentary: Domestic Violence- Faces of Fear. The national air date was May 30, 1996. Topic: Linda Walls surviving her four children who were murdered by her three youngest children’s father, and clips of her Self-Defense Against Stalking course at Governor State University

Featured in numerous of local and national news' articles as a survivor and active Advocate of Victims of violent crimes.

The University of Illinois of Chicago, the Hospice epartment, and the Visiting urse Association of hicago's Memorial Service A Time To Remember, 1995. Keynote speaker.

Cook County Probation Department program for parolees on the impact of violent crimes, 1994.

Chicago Housing Authority CHA) 1994, Conference: "In Our Own Hands: Strategies for Peace in Public Housing Communities."

Carver Preschool Parent Center's PEEP Program, 1994, "How To Survive When All Is Lost."

Inquiries: To request an interview or appearance by Ms. Walls
Contact:
Email: linda@lindawalls.net

Review
Hugh Walls reviewed on Feb. 3, 2013
(no rating)
Powerful book. Hard subject to read but very moving book and empowering. I would recommend this to every young woman starting to date.

You have subscribed to alerts for Linda Walls.

You have been added to Linda Walls's favorite list.

You can also sign-up to receive email notifications whenever Linda Walls releases a new book.