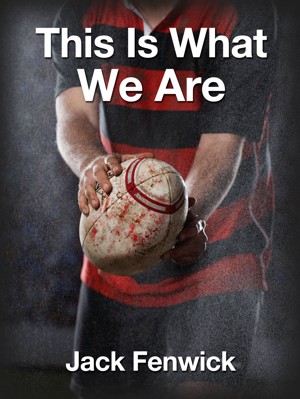 This Is What We Are

By Jack Fenwick
Rated 5.00/5 based on 1 review
This Is What We Are catapults you into experiencing the unaskable — What happens to you if your club dies? — while including broader reflections on rugby and football around Europe and even the States.

It’s compulsive reading for fans. And if you’re close to one of those splendid lunatics who seem to live only for their team, this book will give you a unique insight into what makes them tick. More
For rugby or football fans, “This is what we are” catapults you into experiencing the unaskable: what happens to you when your club suddenly dies?

Meet Jack. Jack was born in Trinidad and lives in Bologna, Italy, which he has made his home. But his spiritual home is just up the Po Valley in Parma, of all places, in a rugby stadium.

A season ago, that would have read “the home of his rugby team”. But market forces mean Jack’s club - Rugby Parma - can no longer afford to field a professional team in its name. It’s joined forces with another club to create a new team with a different name, different colours and different faces.

Jack had lived and breathed Parma Rugby for the best years of his life. His rugby friends had lived every Saturday or Sunday at the stadium for longer than they could remember. Some had been to Parma matches in the womb. It was what had set their blood coursing for a lifetime. And now it was all over.

Except there was this Frankenstein baby tugging at their heels, clamouring for the place in their hearts which still had the contours of their old team, a space that couldn’t be filled.

This compact book of short, powerful, thought-provoking episodes – each like the crucial moments in a match – traces the heartbeat of Parma’s recent glories into the season of mourning when Jack and his Rugby Parma friends had to try and discover who they were again.

But it’s also much more than that, with broader reflections on rugby and indeed football around Europe and even the States.

If you’re the girlfriend, boyfriend, wife, husband, son, daughter or close friend of one of those splendid lunatics who seems to live only for their team, this book will give you a unique insight into what makes their hearts beat and their passions live. Into what they are.
Available ebook formats: epub mobi lrf pdb html
First 20% Sample: epub mobi (Kindle) lrf more Online Reader
pdb
Price: $4.99 USD
Buy Add to Library Give as a Gift
How gifting works
Create Widget
Tags: soccer italy goal tribe team sports books football widowers football widows footie goalposts oval ball rugby widowers rugby widows touchline
About Jack Fenwick

Jack Fenwick was born in Trinidad in the Caribbean, which he – possibly unwisely – decided to leave at the age of one to follow his parents, first to Nigeria and then back home to Britain.

He now lives in Bologna with his Sardinian wife Betta, in less luxury than he would like, and supports one of the rugby teams in the neighbouring city of Parma. He also supports the Italy national rugby team, having lived in Italy for more than half his life and because his wife is his country. And then he supports the British and Irish Lions as well, since – as George Orwell would have it – the red pillar boxes and suet puddings have entered into his soul. Last but not least, he supports the Barbarians because they’re everyone’s team, and everyone’s better for it.

His greatest achievements are having established a good relationship with his wife and dog and acquiring a few friends in life. And finishing this book.

Reviews of This Is What We Are by Jack Fenwick

"This Is What We Are" is an excellent account of the turbulent emotions that come as part of the package when you sign on as a devoted follower of a sports club. Written straight from the heart, it vividly captures the pain and anguish of a fan whose club is the victim of commercial interests in the professional era. If, like Jack, being a fan is more than just about entertainment, this book is for you.

You have subscribed to alerts for Jack Fenwick.

You have been added to Jack Fenwick's favorite list.

You can also sign-up to receive email notifications whenever Jack Fenwick releases a new book.