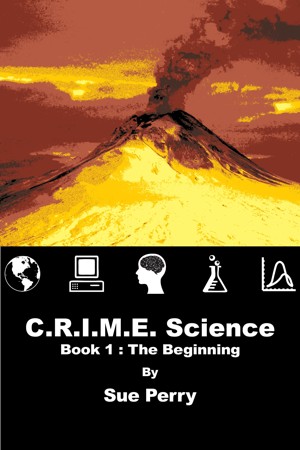 By Sue Perry
Rated 4.00/5 based on 6 reviews
A misfit group of scientists and tech whizzes form a detective agency in order to solve crimes and right wrongs. In this, the first book of a series, they investigate the death of a renowned volcano scientist. He dies in a volcanic eruption in what everyone considers a terrible accident. Everyone except his widow, who insists he was murdered.
Available ebook formats: epub mobi pdf lrf pdb html
Price: $0.99 USD
Buy Add to Library Give as a Gift
How gifting works
Create Widget
Tags: mystery science technology oregon academia detective series volcanoes
About Sue Perry

Reviews of C.R.I.M.E. Science - Book 1: The Beginning by Sue Perry

Interesting premise, 'geeks' as private eyes. Story seemed to wander a bit with unnecessary 'character history' and the ending, to me, was disappointing.

(reviewed 5 days after purchase)
OldJanitor reviewed on Feb. 5, 2013
(no rating)
Just finished reading this book. It had a good storyline which kept me interested. Am looking forward to reading Book 2

**I received this free in return for a review from Library Thing. The opinions expressed are my own.**

A leading vulcanologist is killed in an eruption, but his wife is convinced it was murder. Was she right? A group of scientists who run a sort of detective agency agree to find out what happened. This one is set in the 90s and it shows, but it doesn't really hurt the story. What did make it less enjoyable for me was that I didn't really connect with the main character. The author gives her a back story, but it doesn't explain why she does this kind of work. She's a linguist or something. How does that translate into a private eye? And there's a lot of jargon in here that put me off the story. It reminded me a little of the show Bones, but without a lay character to ask them to explain what the heck they were talking about and why they were doing what they were doing. Don't know if I'll read more or not, but I am curious to see how the author brought them into the present day.

This is a thoroughly entertaining mystery which, hopefully, will be the start of an ongoing series, since it sets up a rich milieu and and intriguing characters with a lot of potential for further adventures. Even in this short novella format, the detectives - scientists and techies - are already interesting and unusual enough to make you want to know more about them, their relationships and their various fields. Perry clearly knows and likes the world she writes about, because she never falls into the trap of quirkiness for its own sake; these folks are genuine oddballs who are convincing and engaging, never forced. The fast-paced plot unfolds organically, combining the serious nature of a death investigation with touches of well-placed comedy, and tossing in enough turns to keep the suspense level up; there's even a neat, unexpected twist at the end. Extremely enjoyable read, let's hope for a series!

In C.R.I.M.E. Science - Book 1: The Beginning by Sue Perry -
a group of young scientist and tech whizzes form a detective agency.
Mrs. Elizabeth Henton comes to them to solve the case of the murder of her husband, Dr. Etheridge Henton.
Dr. Henton's body was cremated after he died in a Volcano explosion. The police nor anyone else suspected foul play.
The group then move in a fast-paced backtrack to see what happened to Dr. Henton.

I received a free copy of this book in exchange for my honest review, rather it be good or bad.

Excellent story. Lots of well paced action and development, plus some surprises and subtle delights. Nicely balanced; the story holds serious and humorous bits, yet it doesn't devolve into drudgery or silliness.

While it's not a long book, it is a good book - and a fine, enjoyable reading experience. More please!

You can tell that this book was written in the past. So many changes in phones & computers. I would be interested in what the next book in the series will be like.
I had a problem of connecting to the characters and caring about what happens to them.
The story was good but a lot of science that made it hard for me to be interested.
Its a clean read. A short story or novella.
This is a different detective agency with a bunch of scientists and tech whizzes that solve cases.
Thier client wants them to prove that her husband a famous volcano scientist was murdered. The police did not question his death was anything but a accident. A lot of volcano scientists die in explosions or eruptions. She had the body cremated before she thought it through.
They take the case and try to back track and see who might have wanted him dead and why.
I was given this ebook to read and asked to give a honest review of it when I had read it by Librarything.
Published: Dec. 24, 2012 File Size: 209 KB ASIN: B00AZNXLH6