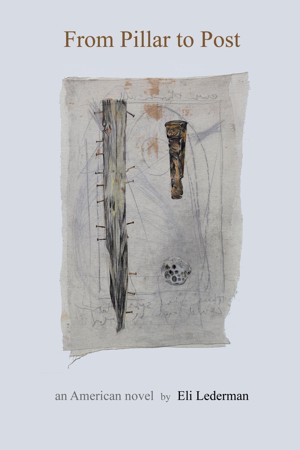 By Eli Lederman
An American novel: The fantastic story of Jack Cover, cowboy poet. More
When law enforcement agents disrupt his search for meaning in modern life, Jack Cover departs his native Wyoming to seek refuge and inspiration in New York City. Followed there by his girlfriend muse and accompanied by an expanding circle of followers, Jack moves among ranchers and romeos, nymphs and nerds, giants and aesthetes, some of them creative and some damned, and all seeking their way in a world where High Society live like homeless while generous bohemians reach for glory. Set over a single week in 1985 amidst the “Culture Wars” then raging in the United States, From Pillar to Post tells a romantic tale of art and science, cliques and clubs, drinks and drugs, promises and promiscuity, and people’s progress through privilege and pathos, to despair, hope, joy and resurrection. Picaresque and poetic, joyful and mad, romantic and demented, FROM PILLAR TO POST.
Available ebook formats: epub mobi pdf rtf lrf pdb txt html
First 20% Sample: epub mobi (Kindle) lrf more Online Reader
pdb
Price: $5.69 USD
Buy Add to Library Give as a Gift
How gifting works
Create Widget
Tags: romance poetry faith culture road
About Eli Lederman

Eli Lederman was born in New York City in 1963. A graduate in physics from Brown University, he received a Ph.D at NYU before spending two years as a post-doctoral fellow at Harvard. During a fourteen year career at Morgan Stanley, half in New York and half in London, Eli was a managing director who established innovative new businesses in electronic trading and financial technology. From 2007 to 2010, he was the chief executive of a pan-European stock market owned by several of the largest investment banks in the world. He has been a landscaper and a lifeguard, prep cook and head cook, teacher and professor, semiconductor engineer and salesman; he has washed dishes and bused tables, painted houses, delivered flowers and tended bar, among other jobs. Since 2001, Eli has lived in England with his wife and three children.

Reviews of From Pillar to Post by Eli Lederman

You have subscribed to alerts for Eli Lederman.

You have been added to Eli Lederman's favorite list.

You can also sign-up to receive email notifications whenever Eli Lederman releases a new book.